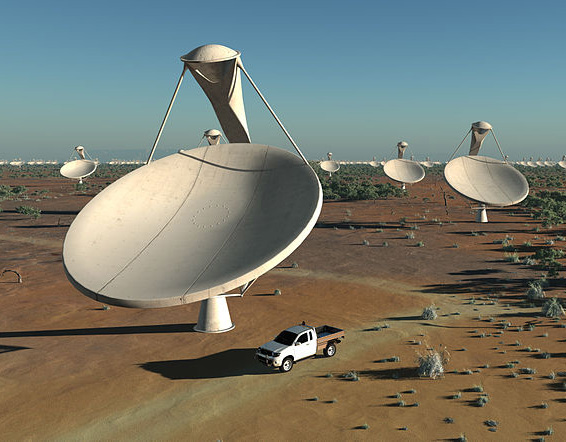 The first scientific paper based on observations performed with South Africa’s new KAT-7 radio telescope, has been accepted for publication by the prestigious journal Monthly Notices of the Royal Astronomy Society.

“This is a significant milestone for South Africa’s SKA project, proving that our engineers are able to deliver a cutting-edge scientific instrument, and that our scientists are able to use it for frontier science,” says Derek Hanekom, South Africa’s Minister of Science and Technology. “It bodes well for the delivery of our 64-dish MeerKAT telescope, currently under construction in the Karoo, and for our ability to play a key role in building and commissioning thousands of SKA antennas over the next ten years.”

Using the new KAT-7 telescope in the Karoo and the existing 26 m radio telescope at the Hartebeesthoek Radio Astronomy Observatory (HartRAO), South African and international astronomers have observed a neutron star system known as Circinus X-1 as it fires energetic matter from its core in extensive, compact jets that flare brightly. The details of the flares are visible only in radio waves.

Circinus X-1 is an X-ray binary (or two-star system) where one of the companion stars is a high-density, compact neutron star (a neutron star is an extremely dense and compact remnant of an exploded star, only about 20 km in diameter.) The two stars orbit each other every 16.5 days in an elliptical orbit. When the two stars are at their closest, the gravity of the dense neutron star pulls material from the companion star. A powerful jet of material then blasts out from the system.

During the time that KAT-7 observed Circinus X-1 (13 December 2011 to 16 January 2012), the system flared twice at levels among the highest observed in recent years. KAT-7 was able to catch both these flares and follow them as they progressed. This is the first time that the system has been observed in such detail during multiple flare cycles.

“One way of explaining what is happening is that the compact neutron star gobbles up part of its companion star and then fires much of this matter back out again,” explains Dr Richard Armstrong, an SKA Fellow at the University of Cape Town and lead author of the paper reporting these results. “The dramatic radio flares happen when the matter Circinus X-1 has violently ejected slows down as it smashes into the surrounding gas.”

At the same time Circinus X-1 was being observed at HartRAO at two higher frequencies as part of a long-term study of this object. “The flares are much stronger at the higher frequencies and by combining the three sets of measurements, we could study how each flare evolved as time progressed and investigate details of the turbulent interactions of the jet,” adds HartRAO Emeritus Astronomer Dr George Nicolson, a pioneer of radio astronomy in South Africa.

“These types of observations help us to understand how matter is accreted onto extremely dense systems, such as neutron stars and black holes,” Armstrong says. “They also shed light on how neutron stars are able to generate these powerful outflows and associated radio bursts.”

“KAT-7 was really intended as an engineering test bed to refine the design and systems for the MeerKAT telescope that we are working on now, but we are absolutely delighted that it has turned out to be a top quality science instrument, capable of producing significant science,” says Professor Justin Jonas of Rhodes University, who is also the associate director for science and engineering at the SKA South Africa Project Office. “We plan to continue using KAT-7 to do science until at least 2015 when part of the 64-dish MeerKAT telescope will become available to researchers.”

Scientists from the SKA Project in South Africa and local and international universities worked together on both the observations and the analysis. This work is part of the development for the ThunderKAT project on MeerKAT, which will find many more of these types of systems in the galaxy, and search for new types of radio systems that change rapidly with time.

The two leaders of the ThunderKAT project, Professor Rob Fender of the University of Southampton and Professor Patrick Woudt of the University of Cape Town, explain that the ThunderKAT project searches for all types of radio bursts and flashes in KAT-7 and MeerKAT data on timescales from seconds to years. Finding and studying the systems that produce these outbursts will allow us to test the extremes of physics, and are beyond anything achievable in any laboratory on Earth. “These systems provide a unique glimpse of the laws of physics operating in extraordinary regimes”, Woudt says, “and nearly all such events are associated with transient radio emission.”

The ThunderKAT project is already well under way, and besides these observations, has made targeted observations of other exciting systems including the flaring black hole candidate Swift J1745.1-2624, the diffuse radio structure around the black-hole binary GRS 1915+105, as well as a system that is very close to our Sun, the brown dwarf binary WISE 1049-5319.