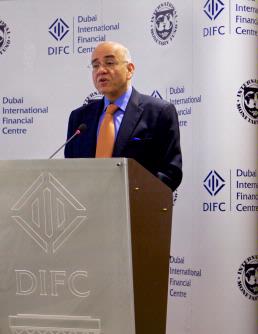 The Outlook, titled “Middle East and North Africa: Defining the Road Ahead”, looks at the implications of the economic roads ahead for the Middle East and North Africa (MENAP)[1] region against the backdrop of complex political, social, and economic transitions. Moving on from last year’s sluggish economic growth in the oil importers, a mild economic recovery is anticipated due to the scaling-back of hydrocarbon production amongst oil exporters. The update stressed that countries must not lose sight of the medium-term challenge of diversifying their economies, creating jobs, and generating more inclusive growth.

According to the report, last year’s subdued growth in MENAP oil importers is expected to improve by 3 per cent in 2013, however this will not be sufficient to make sizeable inroads into the region’s large unemployment pool. Oil producers are expected to scale back the rate of production from an average of 5.7 per cent in 2012 to 3.2 percent this year. This is due to modest global oil demand; however, continued strong public spending is expected to support non-oil growth at comfortable levels in many of these countries.

Masood Ahmed, Director of the IMF’s Middle East and Central Asia Department, said: “Resolute policy action, across the region, will be necessary this year, for both oil exporter and oil importer countries. For MENAP oil exporters, further strengthening of fiscal and external positions will be important to reduce their vulnerability to potential material oil price decline. Whereas for oil importers, greater fiscal consolidation will be necessary to preserve macroeconomic stability, instill confidence, improve competitiveness, and mobilize external financing.”

Mr. Jeff Singer, CEO of DIFC Authority said: “The IMF report indicates the need for job creation in the region and for policymakers to design and implement a bold agenda of structural reforms. Private sector growth and increased international trade will be paramount to meet the growing infrastructure and capital investment needs for the region. We are once again delighted to host Mr. Masood and the IMF in DIFC to share their insights into the complex and dynamic nature of the region.”