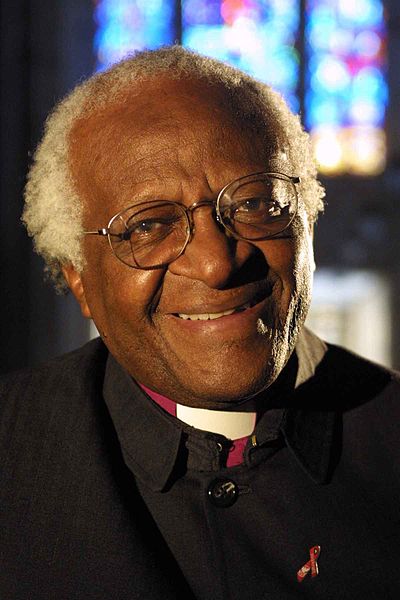 “Even stricken as he is in hospital, Madiba is uniting the nation again – this time in prayer,” said Tutu on Sunday at the opening of the ‘Cape Town Honours Nelson Mandela’ exhibition at the Cape Town Civic Centre.

The exhibition is the brainchild of Cape Town Mayor Patricia de Lille, a first of its kind to be held in South Africa.

The elderly former statesman has been in hospital since June 8 due to a recurring lung infection. Doctors describe his condition as stable but critical.

Messages of support and prayers have been pouring in for Mandela. Tutu took a moment to share a heartfelt message. “We come here not to lament… but to remember some of our most precious moments. We come here to honour.”

He thanked God for the incredible person that Nelson Mandela is. “We pray for his comfort and dignity.”

Also present at the opening was Minister in the Presidency, Trevor Manuel. He was part of Mandela’s Cabinet during his administration.

He recalled the times when Mandela called in members of his Cabinet for a talk. The experience, said Manuel, was not like that of a president disciplining a minister, but it was more like a father talking.

Manuel told the gathering that he did not want to go down memory lane, but would rather talk about some of Mandela’s characteristics.

He named some of these trademarks as being calm, cool and collected; caring about people; nation-building; being a dedicated and loyal member of the African National Congress and his understanding of leadership.

Mandela was also against racism and sexism, Manuel said.

“Nation-building is what he woke up to and spoke of every day,” the Minister responsible for the National Planning Commission said.

On the cool, calm and collected Mandela, Manuel recalled the day of Mandela’s release from Victor Verster Prison, 11 February 1990, and how the newly released political prisoner was separated from his convoy.

Manuel recounted how they “fetched and lost” Madiba. But the police told them where he was having tea. When Mandela saw them, he said: “Gee whiz! I was getting worried about you chaps. What took you so long?”

The opening was attended by a cross-section of politicians and civil society activists.

Manuel, Tutu and other speakers made a special point of thanking De Lille and the City of Cape Town for conceiving and holding the exhibition, which they said represented Mandela’s vision of unity in diversity.

De Lille said that South Africans were free today because “of the strong sense of freedom that lives so freely in him”.

She said she wanted to celebrate Mandela in his lifetime, adding “there is a reason we are here today: it is because Madiba is part of all of us and he gave a part of himself to all of us.”

The world will next month will observe Mandela Day on the 18th, where individuals are encouraged to do an act of good for 67 minutes for the betterment of mankind.