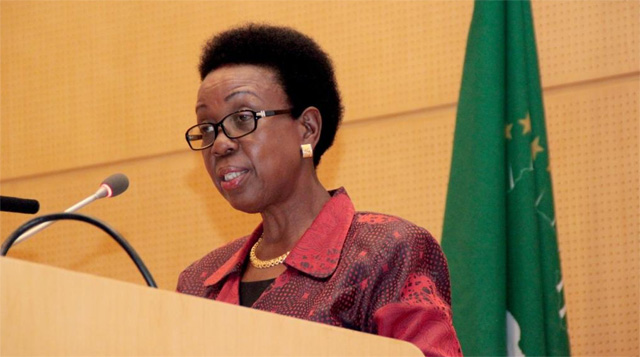 African Union Commissioner for Rural Economy and Agriculture Her Excellency Rhoda Peace Tumusiime has been awarded the prestigious Presidential Award for outstanding Women in Uganda.

Tumusiime’s award was presented by Ugandan President H.E. Yoweri Kaguta Museveni himself during the International Women’s Day Cerebrations held at Kololo Independence Grounds. Commissioner Tumusiime is among the few Ugandan Women recognized by the Ugandan Government for the outstanding role played in the development of the Country and enhancing the status of women in Uganda.

Presenting the award to the president, the chairperson of the National award committee, General Elly Tumwine said Commissioner Rhoda Peace Tumusiime had played an outstanding contribution in the development of Uganda and further played an instrumental role in creating change at continental level.

H.E. Rhoda Peace Tumusiime was presented to the President as the first awardee in recognition of her role played in the country. She was the first female commissioner for women who set up the Women Ministry.