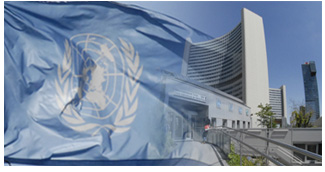 The Permanent Representative of the People’s Democratic Republic of Algeria to the United Nations (Vienna), Ms. Faouzia Mebarki, presented her credentials today to the Director-General of the United Nations Office at Vienna (UNOV), Yury Fedotov.

During her career at the Algerian Ministry of Foreign Affairs Ms. Mebarki has served in various capacities, among them:

Designated Ambassador to Austria and Slovakia, and Permanent Representative to the International Organizations in Vienna (2016); Chief of Staff of the Minister of Maghreb Affairs, African Union and League of Arab States (2015); Director of Central and Eastern European Countries (2014); Responsible for relations with the European Parliament at Embassy of Algeria in Brussels (2010); Deputy Consul at the Consulate of Algeria in Bobigny, France (2007); Deputy Director of Information Analysis and Management (2003); Deputy Director of International Social and Cultural Affairs (2001); Deputy Permanent Representative to UNESCO at the Embassy of Algeria in Paris, France (1995).

She is married and has one son.