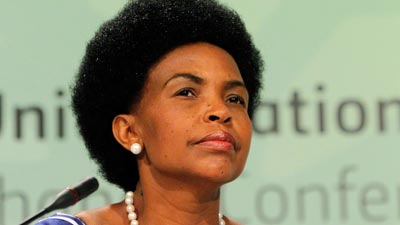 Dr Venson-Moitoi is campaigning for the AU Commission chairperson post. She is the Foreign Minister of Botswana.

“South Africa is bound by the decision of the countries of the South, which have endorsed the candidature of Dr Venson-Moitoi to succeed Dr Nkosazana Dlamini-Zuma.

“In this regard, the region is campaigning for her and South Africa is fully behind our SADC candidate for the position of the chairperson,” Minister Nkoana-Mashabane said.

The Minister announced this during a media briefing on international developments on Monday, which included the upcoming mid-year Summit of the AU to take place on 17 and 18 July 2016, in Kigali, Rwanda.

Held under the theme ‘2016: African Year of Human Rights with a particular focus on Women Rights’, the summit will look at the state of peace and security in Africa, and the election and appointment of the new African Union Commission.

Other major issues that will be looked at during the summit include financing of the AU, integration of the continent and the Continental Free Trade Area, the implementation of NEPAD projects and the African Peer Review Mechanism.

It will further report on Aids Watch Africa, African trade and the implementation of the Kigali Water Action Plan.

“…She made us very proud. Her ascension to the position made her the first woman ever in 50 years to ascend to that position, and she turned around the working methods of the AU.

“Under her leadership, when we hosted the AU Summit … last year, we endorsed the first 10 years of implementation of [Agenda 2063] projects… We are now in the second year of that and we are already seeing a whole lot of initiatives that look at [among others], the integration of rail networks,” said Minister Nkoana-Mashabane.

Meanwhile, the Minister said South Africa’s two-year term of office as a Member of the Peace and Security Council was extended for another two years until 31 March 2018. She said this decision places South Africa at the centre of efforts to ensure that Africa is “peaceful, secure and stable.”