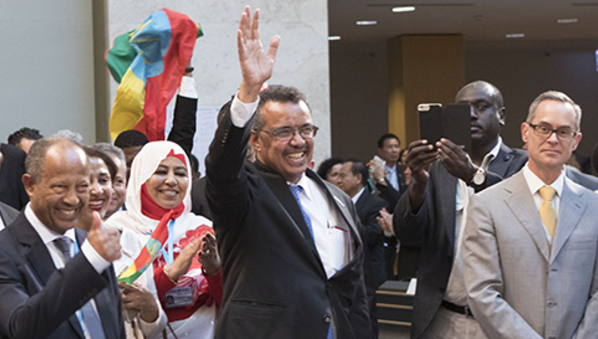 The new leader was backed by the global South. Can he get the world’s premier health body into shape? Linda Nordling finds out.

[CAPE TOWN] Last week the World Health Assembly, for the first time in its history, elected an African to be the next director-general (DG) of the World Health Organization (WHO). Tedros Adhanom Ghebreyesus, an Ethiopian, will also be the first WHO leader from a developing country for over 45 years — since Marcolino Candau from Brazil stepped down in 1973.

Tedros, who goes by his first name, enjoys solid support among developing countries. For the first time in WHO’s 70-year history, each of the 194 member countries that make up its Assembly was allowed to vote — a job that in the past fell to the 34-member WHO executive board.

Tedros beat his last opponent standing, the UK’s David Nabarro, with a landslide 133 votes to 50 — numbers that suggest the entire global South voted for the former Ethiopian health minister.

As a result, when Tedros succeeds Margaret Chan on 1 July he will have an unprecedented mandate from the countries with the world’s most pressing health problems. From dreaded new diseases like Ebola to HIV/AIDS and tuberculosis, the burden is vastly higher in developing countries than in developed ones — and is now worsened by soaring rates of non-communicable diseases like cancer and diabetes.

Funding will be at the top of the agenda, according to global health experts.

Gavin Yamey, a professor of the practice of global health at Duke University’s Global Health Institute in the United States, says that, as a matter of urgency, Tedros will need to use this unique mandate to try to leverage increased funding for the WHO after years of dwindling support from member states.

“The WHO was caught on the wrong foot in its slow, weak response to Ebola, but in many ways we are all responsible because we as a global community have been starving the WHO of the core funding it needs,” says Yamey.

Yamey was the lead author of an article, published this month in The Lancet, urging health ministers to boost their support for the WHO’s programmes to quell epidemics and outbreaks.

“A scientist with extensive research experience in Africa can help guide the WHO to be responsive to… researchers on the frontlines.”

He says there is “guarded optimism” about Tedros’ ability to revitalise the WHO. He puts this down to, on the one hand, the assured way in which Tedros handled the transparent election process, and, on the other, his “deft political skills on the global stage”.

Others are not so sure Tedros’ clout will be sufficient to re-invigorate the WHO’s funding base. The organisation’s biggest funder, the US government, is looking at curtailing support for international health programmes if President Donald Trump’s administration gets its way in upcoming federal budgets.

“I think the new DG will be locked in hard negotiations from day one,” said one African health expert who did not want to be named.

Another challenge for Tedros is how to transform the WHO into an organisation fit for its 21st century purpose.

At its inception in 1948, it was the only health organisation with a global mandate. Today, there are many other players in the field, ranging from charities like the Bill & Melinda Gates Foundation — the second biggest contributor of funds to the WHO — to inter-governmental instruments like the Global Fund to Fight AIDS, Tuberculosis and Malaria.

The WHO is a lumbering and expensive bureaucracy with headquarters in Geneva and regional offices around the world. Last year, it reportedly spent more on travel and hotels than on AIDS, malaria and tuberculosis combined.

Its mission has also grown over the decades, from infectious diseases to issues like chemical safety, road traffic safety and ageing — a 2014 Chatham House report urged the WHO to rein in its mission-creep and streamline its operations.

According to WHO figures, during his tenure from 2005 to 2012, Tedros created 3,500 new health centres and 16,000 health posts in the country, and expanded the number of people covered by the health system. The WHO also points out that Ethiopia has achieved a “remarkable” drop in infant mortality, achieving the Millennium Development Goal of a two-thirds reduction some two years ahead of schedule.

His background as a molecular biologist and malaria scientist could mean Tedros uses his new platform to impress upon global health actors the importance of building and calling on local scientific expertise when dealing with health crises.

“A WHO DG who is a scientist with extensive on-the-ground research experience in Africa, can help guide the WHO to be responsive to the priorities of those researchers on the frontlines in Africa and worldwide,” says Nina Dudnik, founder and chief executive of the Seeding Labs initiative, which accepts donated research equipment from developed country institutions and places them in developing world labs.

More importantly, he could use his influence to impress upon developing countries the need to invest in — and leverage funding for — their own health systems and research capacity, says Bassirou Bonfoh, Director General of the Centre Suisse de Recherches Scientifiques in Côte d’Ivoire.

The need for such capacity became apparent during the 2014 Ebola outbreak in West Africa, when a dearth of health workers on the ground contributed to the delayed recognition of how severe the outbreak was, and hampered containment efforts.

Would such investments align with broader public health and funding priorities? A WHO report dating back to 2007 suggests that it would help maximise the benefit of international funding channelled through organisations like the WHO, by expediting their work and ensuring health gains do not vanish with the departure of international workers.

And as WACI Health, an Africa-based health NGO, highlighted earlier this year, it would also buffer countries against future health crises, which could be made worse by dwindling international support should Tedros fail to generate the cash.