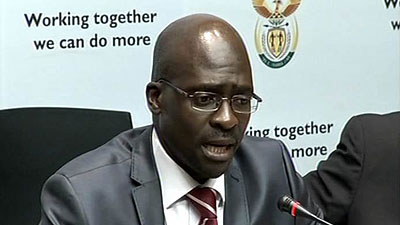 Speaking in Parliament, Minister Gigaba congratulated Mogajane on his appointment “in this important position” and wished him well in his future endeavours.

Mogajane joined National Treasury in 1999 as a Deputy Director and has worked in various areas within the department, including Intergovernmental Relations, Provincial Budget Analysis and International Economic Relations. Between 2007 and 2010, Mogajane represented South Africa at the Executive Board of the World Bank as a senior advisor for Africa Group 1 countries.

Between 2010 and May 2014, Mogajane served as the Chief of Staff in the Ministry of Finance and later as the acting Chief Operating Officer from May 2014 until May 2015.

He was later appointed Deputy Director General responsible for the Public Finance Division at National Treasury, a position he occupied since June 2015.

Following a request by former DG Fuzile to end his contract in May 2017 instead of May 2018, Mogajane was appointed acting Director General from 15 May 2017.

Prior to his appointment at National Treasury, Mogajane was a student housing manager and part-time lecturer at Durban Westville University. He was also a lecturer in public management at Technikon SA and ML Sultan Technikon, and Deputy Director at the Environmental and Development Agency Trust.