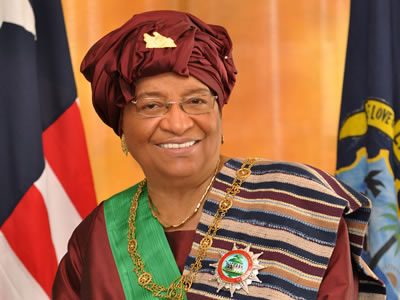 Liberian President Ellen Johnson Sirleaf has used part of her State visit to South Africa to share lessons she has learnt along the way as the continent’s first elected female Head of State.

President Johnson Sirleaf’s visit coincides with the country’s commemoration of Women’s Month. Her visit is an important vehicle for economic growth and cooperation between South Africa and Liberia, and will further contribute to strengthening intra-trade relations on the continent.

The West African leader is highly optimistic of women’s abilities to break the ceiling in terms of political leadership, and says women must capitalise on their strength and numbers to make their voices heard.

“I have great confidence in what is happening in terms of equal opportunities, equity, justice and the contribution of women in taking their rightful place in leadership throughout society, and not just the Presidential role but throughout every area,” she said on Friday at the Union Buildings in Tshwane.

African women, President Johnson Sirleaf said, must become an integral part of high level decisions that affect their lives. She said her journey as the first female Head of State in Africa is testament that women have significant roles to play in achieving the socio-economic goals that many countries have set for themselves.

“Women have been able to do it, and we hope that my own record will inspire the many South African women, who have been so strong and courageous in their various endeavours, to be able to move forward and take the example that I and a few others have set, and to take it to the same [level],” she said.

South African President Jacob Zuma used the occasion to commend his Liberian counterpart for the sterling work she has put into reviving her country. He said South Africa is encouraged by President Sirleaf’s endeavours to tackle the challenges facing Liberia.

“You are not only an inspiration to women throughout our continent, but to every one of us, irrespective of gender, race or any other form of description.

“The confidence which the people of Liberia and the rest of the continent have in you, and the fact that you have successfully completed your two terms as the President and Head of State with excellence, is a sure sign and proof that Africa is on the right path.”

“We have seen an African woman who comes from a country that was troubled but stabilised it and began to develop that country. As if that was not enough, Ebola attacked the country severely and [President Johnson Sirleaf] led from the front to fight it and defeated it. This was at a point when many were saying the disease is going to finish off the population (sic).”

He said South Africa has valuable notes to take from Liberia, and that whoever will take over at the end of President Johnson Sirleaf’s tenure will benefit from the work she has done.