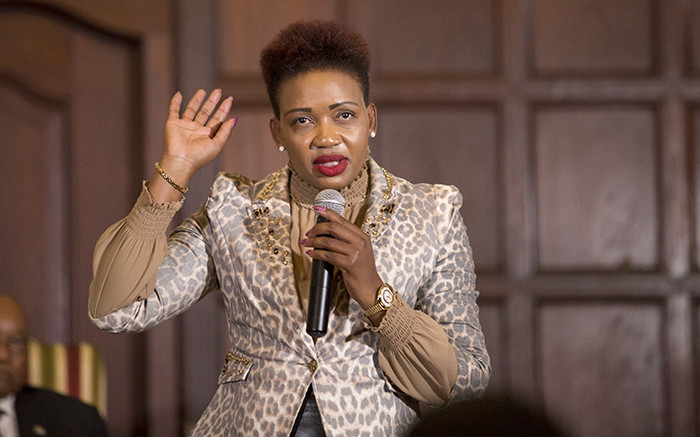 Communications Deputy Minister Tandi Mahambehlala has urged learners at Masiyile High School in Khayelitsha to aim for the stars in the upcoming National Senior Certificate examinations and not let circumstances get in the way of their success.

The Deputy Minister said this when she visited the school in the Western Cape on Tuesday to hand over sanitary towels to girl learners.

“We are coming here today 12 days before the matriculants write their exams.

“This is one of the schools that has produced great learners with distinctions in matric in previous years. Now our responsibility here, as legislatures, is to ensure that we strengthen the work that the teachers are doing in different schools,” she said.

The Deputy Minister’s visit comes at a time when several fundraising initiatives from various sectors of society are underway to ensure that a girl child, especially those from schools in poor communities, receive sanitary products to ensure that they are not absent from school.

When she arrived at the school, the Deputy Minister addressed learners, encouraged them to work hard and do well in the upcoming exams, before handing out sanitary towels to girl learners who appeared to be jubilant.

She also promised that she would give top performing grade 12 learners smart mobile devices – from iPods, iPads to laptops.

The Deputy Minister said sanitary towels were important in helping a girl child to stay in school.

“Now today we are specifically here to give a girl child a sanitary towel because a sanitary towel for us as government [means] dignity and it is a necessity. We have discovered that some of the girls stay away from school when they are [on their period].

“It is either because they don’t have a sanitary towel or they just don’t want to be embarrassed to come to school in that situation.”

The Deputy Minister said it was important for government to ensure that it provides for the disadvantaged, particularly poor communities.

“This is one of the schools that were engulfed with criminal elements and gangsterism at some point. If we come here more often and encourage these learners – boys and girls – they will see the meaning of education that as a young person, [he or she is] the future of the country.”

She said the learners must get to a point where they realise that they need to educate themselves to “ensure that [they] acquire education at some time because education is very important for all South Africans.”

The Deputy Minister also told learners to never stop learning and studying to broaden their horizons. She told learners that while she had ministerial duties, she continues to study towards her Master’s Degree at the University of the Western Cape.

She said she identified with some circumstances that surround them in Khayelitsha because she grew up in the nearby Philippi township under the care of her poor mother, who was a domestic worker. She said that didn’t stop her from achieving what she set out to achieve.

After the handover of the sanitary towels, several girl learners expressed their gratitude.

One of them, Linda Tshona, a grade 12 student, said: “I feel happy that we have received sanitary pads because most of the girls normally don’t have access to pads and end up using [unhygienic fabrics].

“By bringing these pads to us, they have helped us a lot because when girls never feel comfortable to learn when they are on their periods without pads.”