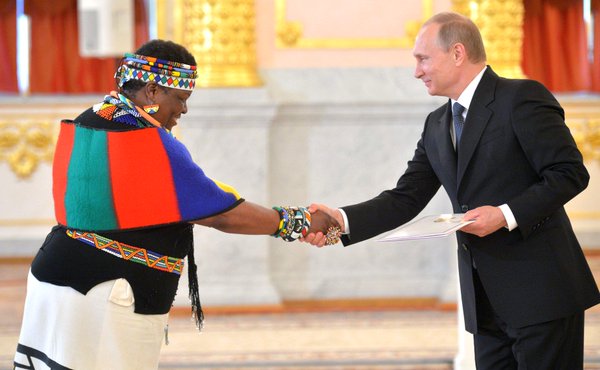 The South African Ambassador to Russia, Nomasonto Sibanda-Thusi says the South African government invests in international trade and investment missions in order to assist companies contribute in creating much-needed jobs for the country’s people. Sibanda-Thusi was addressing a group of South African businesspeople on the last day of the Investment and Trade Initiative (ITI) to Novosibirsk, Russia.

The purpose of the mission, which was organised and funded by the Department of Trade and Industry (the dti) was to increase exports of agro-processing and clothing and textile products, as well as built environment and capital equipment goods, and services to the Russian market. Twenty companies participated in the mission, which started on Tuesday.

“As representatives of the government of South Africa we are entrusted with the task of enhancing political and economic relations between the countries we are posted in and South Africa. Our task is to promote cordial mutual bilateral relations that will enable us to position South Africa as a country of choice for bilateral trade and investment. It is the symbiosis between our political and economic relations that opens doors for our companies to engage in two-way trade and investment activities,” said Sibanda-Thusi.

She added that the SA government invests in trade and investment missions because companies that participate in these missions are able to contribute in growing the economy of South Africa and creating jobs that the country needs very much.

“We identify markets where opportunities exist for the South African value-added products in particular, to be exported to. Once the companies find new export markets for their products, they increase their production which assists in saving jobs, and creating new job opportunities. That is the reason why we as government invest in these missions because their positive impact on our economy is far-reaching,” added Sibanda-Thusi.

Business people who are in the agro-processing, and clothing and textile sectors spent the last day of the ITI visiting two supermarkets with the aim of identifying opportunities of supplying them with products from South Africa. The group operating in the built environment visited a local techno park and held a meeting with the city’s construction councillor.

After spotting fresh produce from South Africa in the supermarkets, a member of the delegation who represented the Fresh Produce Exporters Forum, Mr Anton Kruger said he was confident that more produce could be exported to more supermarkets in the Novosibirsk region of Russia. The optimism stemmed from feedback from the management of the supermarkets who expressed their satisfaction in the quality of the SA products.

Special Envoys on a mission to net $100bn in investment

Merck Foundation Launches their programs in Partnership with the First Lady...