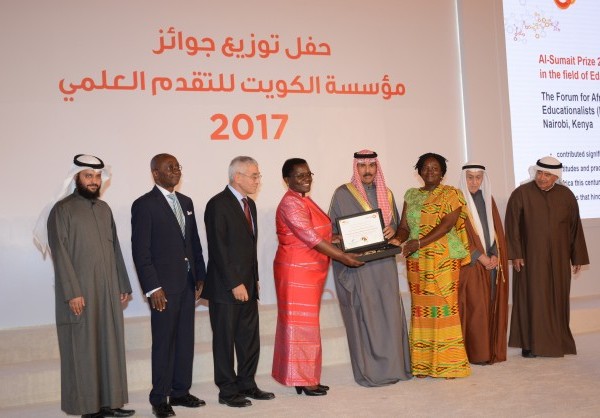 His Highness Deputy Amir Crown Prince Nawaf Al Ahmed Al Sabah awarded the 2017 prize, which comprises of one million dollars, a gold medal and shield at a special ceremony yesterday morning in Kuwait.

The 2017 Al-Sumait Education category award went to the Forum of African Women Educationalists (FAWE) Kenya, for their sustained efforts towards the achievement across the African continent of equity and equality in education through targeted programs. FAWE Africa Executive Director Hendrina Doroba said, “We feel tremendously honoured by this award that will be used to support our efforts in promoting and developing equity and equality in education on the continent, particularly through our centres of excellence and partnerships with governments across Africa.”

Initiated in 2013 by His Highness The Amir of Kuwait Sheikh Sabah Al-Ahmad Al-Jaber Al- Sabah, the Al-Sumait Prize for African Development is designed to reward innovative and inspiring initiatives and research by individuals and organizations that address the challenges facing the African continent. The award recognizes and honours individuals or institutions that help advance economic and social development, human resources development and infrastructure in Africa.

We feel tremendously honoured by this award that will be used to support our efforts in promoting and developing equity and equality in education on the continent
Dr. Adnan Shihab-Eldin, Director General of the Kuwait Foundation for the Advancement of Sciences (KFAS) (www.KFAS.org), which administers Kuwait’s Al-Sumait Prize (www.AlSumaitPrize.org) for African Development, told the audience that FAWE’s inclusive and strategic approach to tackling education inequality in particular between girls and boys education was truly inspiring.

The Al-Sumait Board of Trustees comprises prominent international personalities in the field of development in Africa and world-renowned philanthropists. The Board is chaired by H.E. Sheikh Sabah Khaled Al-Hamad Al-Sabah, First Deputy Prime Minister and Minister of Foreign Affairs of the State of Kuwait.

Other trustees include Mr. Bill Gates, Co-Chair of the Bill & Melinda Gates Foundation, Mr. Makhtar Diop, Vice President of the World Bank for Africa, Dr. Kwaku Aning, Former Deputy Director General of the International Atomic Energy Agency, and Mr. Abdulatif Al-Hamad, Director General and Chairman of the Board of the Arab Fund for Economic and Social Development.