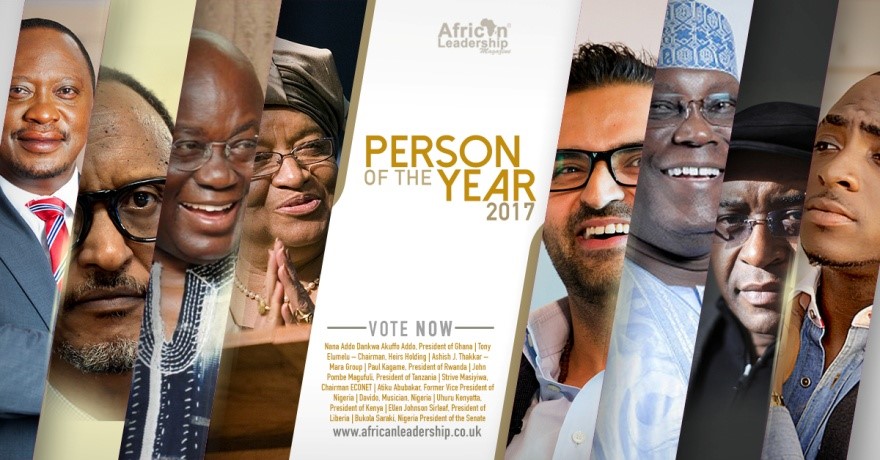 As in previous editions, this year’s nominees passed through a thorough vetting process, which includes the selection from a long list of over 250 outstanding individuals who have contributed to the continent’s progress in the year under review. Remarkably, this year, African Leadership Magazine Persons of the Year was consigned to three themes – which are jobs & wealth creation, Promotion of Democratic Values; & the promotion of Africa’s image abroad. With Africa’s population tipped to double by the year 2050, and unemployment at the center of the problems confronting the continent, jobs and wealth creators deserve to be especially encouraged and supported. In selecting the nominees for this year, the selection committee took a keen interest in Africans whose activities, policies and actions have contributed to creating jobs and spreading wealth; promoting democratic values; and / or promoting Africa’s image abroad. And then, of course, we add in a dose of our editorial judgment.

In announcing the shortlist of nominees, Publisher of the Magazine, Ken Giami stated that “Africans have continued to break and set new boundaries, making the selection a lot more interesting, albeit, herculean.” Dr. Giami added that “some African leaders have become increasingly restless, leaving nothing to chance on their journey to make their communities a better place.

The African Leadership Magazine Persons of the Year Award is in keeping with our tradition of presenting the sides of the continent, which hardly finds placement on the global mainstream media, and celebrating exemplary leadership and individuals who have contributed to shaping the global perception of the African continent. These group of Africans are the Game-Changers, who are doing things differently towards re-positioning the African continent.

The winners of the 2017 Persons of the Year Award would be announced on 5thJanuary 2018, by 2.00pm Central African time, and would be formally decorated, alongside the nominees, on 24 February 2018 in Johannesburg, South Africa at an investiture and Gala to be attended by some of Africa’s finest in business, politics, and diplomacy.

Africans have continued to break and set new boundaries, making the selection a lot more interesting, albeit, herculean

African Female Leader of the Year 2017

This recognition is open to an African, whose contribution to the growth of education and deepening knowledge has been second to none in the year under review. It is also reserved for a member of the academia whose research or policy has contributed in shaping his or her country’s economic growth and development
1. Are Afe Babalola, Afe Babalola University
2. Strive Masiyiwa, Chairman ECONET
3. Prof. Admola Tayo, Vice Chancellor, Babcock University
4. Fred Swaniker, Founder, African Leadership University

This recognition is open to an African, whose contribution has immensely contributed in deepening democracy and democratic values in the continent.
1. Julius Malema
2. Uhuru Kenyatta
3. Ellen Johnson Sirleaf
4. Marc Ravalomanana, Former President of Madagascar
5. Bukola Saraki, Nigeria President of the Senate

ALM Person of the Year 2017 – Philanthropy & Charitable Contributions to Society