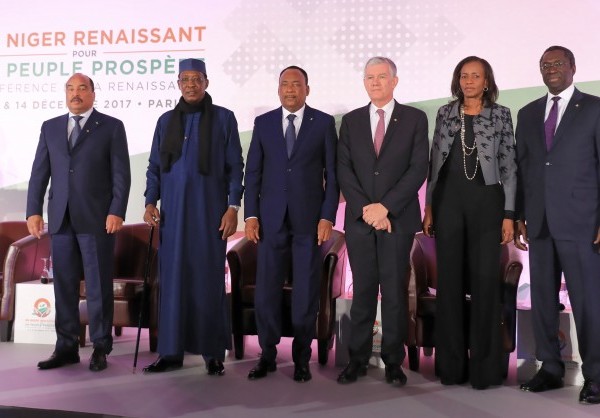 Following 2 days of meetings in Paris with technical and financial partners, fund providers and investors, Niger can be proud of a considerable diplomatic and economic success. Resolved and persuasive under the guidance of its President Issoufou Mahamadou, the government of Niger successfully raised over 23 billion dollars to support the country’s efforts to finance and implement its 2017-2021 economic development plan.

The driving force behind the Renaissance Conference (www.NigerRenaissant.org), Niger’s Minister of Planning, Aïchatou Boulama Kané, expressed her satisfaction by proclaiming that “Niger’s resurgence is underway” at the closing evening of the conference on December 14, 2017. The conference’s first day sought to present Niger’s vision for the next five years and the macroeconomic and strategic instruments in place to achieve that vision. His Excellency Issoufou Mahamadou, President of the Republic of Niger, opened the conference alongside his counterparts His Excellency Idriss Déby Itno, President of the Republic of Chad, and His Excellency Mohamed Ould Abdel Aziz, President of the Islamic Republic of Mauritania. After summarising the progress of Niger over these past 5 years, she reasserted the country’s commitment to harnessing its Economic and Social Development Plan to transform the rural sector and shore up the private sector to speed-up the country’s progress.

Multiple panels throughout the day brought together bilateral and multilateral agencies, governmental authorities and actors in the international private sector of Niger to present the structuring projects in the 2017 Economic and Social Development Plan and efficient multilateral financial levers. Public-private partnership was particularly showcased, marking a substantial shift in Niger’s approach to development.

Niger intends to follow up on all the commitments made

“Invest in Niger, the Private Sector Spearheading a Resurgent and Prosperous Niger”

During the second day of the conference (14 December) Boubacar Zakari Wargo, Permanent Secretary of the High Council for Investment, launched the Investors’ Forum targeting the private sector. This forum had over 400 participants from every corner of the planet representing a variety of sectors and industries such as petroleum, agribusiness, energy and telecoms. The highlight of this second day was the signing of numerous expressions of interest amounting to 10.3 billion dollars when the target was initially set at 10 billion dollars.

The Renaissance Conference Closed with Unprecedented Commitments of over 23 Billion Dollars for the 17 Billion of Needs Expressed by the Government of Niger.

Niger ultimately recorded a total overall amount of 23 billion dollars, an unprecedented commitment. Welcoming the positive results of this important gathering, President Issoufou Mahamadou concluded that “Niger intends to follow up on all the commitments made.”

The two-day Niger Renaissance Conference (www.NigerRenaissant.org) was held in Paris on 13 and 14 December 2017, and had over 800 international participants. The conference was organised by the government of the Republic of the Niger in partnership with the World Bank and the United Nations Development Programme (UNDP), with the support of bilateral and multilateral technical and financial partners.