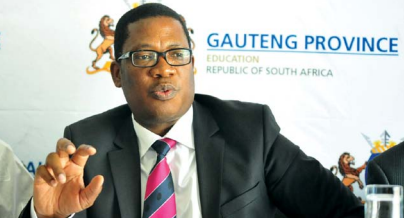 Gauteng Education MEC Panyaza Lesufi has reminded the 11 000 provincial learners, who failed their examinations, that it is not the end of the world.

“We will support all matriculants who have failed. We will provide a Second Chance Programme in 2018 to assist learners who need to complete the National Senior Certificate (NSC). We will assist them in the subjects they failed to ensure that they complete the requirements for passing,” said MEC Lesufi.

The MEC was speaking at the announcement of the Gauteng matric results for the 2017 academic year. Gauteng achieved an overall 85.1% matric pass rate and dominated in the top performing districts. Seven out of the top 10 performing districts emanated from Gauteng.

“To the 11 000 learners that did not make it, you will be placed in the Tshepo One Million programme, which gives learners a second chance. There is no successful person that has not gone through failure. Learn from your mistakes because failure is the best educator and if you need anyone to talk to, we have partnered with several NGOs that can assist,” said the MEC.

The Second Chance Programme in 2018 will focus on the following phases:

• Supplementary exam: Candidates sitting for exams in February/March will receive support in the form of printed resources and multimedia broadcasting solutions (Phase 1).

• Progressed learners: Learners who modularised in the 2017 NSC exams, who will be sitting for exams in June, will receive support in the form of 30 hours face-to-face tutoring in four venues in the two piloted districts during April – June, as well as printed resources and multimedia broadcasting solutions in the rest of the districts (Phase 2). Progressed learners are those who have repeated Grade 11 more than once.

The Second Chance programme and the learner progression policy were introduced to redress the inequalities of the past by creating a channel through which young people can be afforded a second chance in life, rather than adding to the large number of young people who are not in education, are unemployed and not in any form of training.

These programmes are intended to improve the access and retention of learners in the system, and improve the internal efficiency of the system.

MEC Lesufi said protests have to an extent affected the performance of Gauteng matriculants.

“We are tracking these protests to determine their impact on our schools. We plead with communities to desist from such actions and for them to seek alternative methods of protest,” said the MEC.

Out of Africa: Morocco’s bid to be Europe’s main trade link...