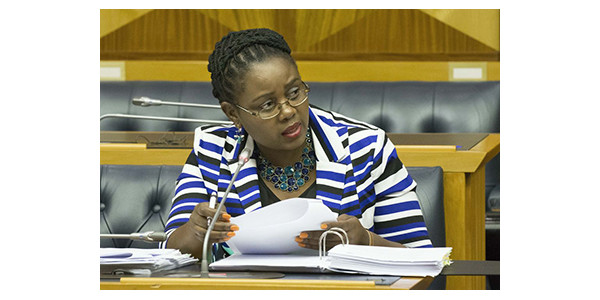 Communications Minister Mmamoloko Kubayi-Ngubane has challenged Grade 12 learners at Thusa Setjhaba Secondary School to obtain a minimum of four distinctions to qualify for her sponsorship to study at a university.

Addressing the learners at her former school on Thursday in Poortjie, she said she will be communicating with the class of 2017 top performing student as she wants to help pay for her university fees.

“I can come back and support another child next year but on condition that you obtain four distinctions. If you are in matric and want our full support, you must get a minimum of four distinctions,” Minister Kubayi-Ngubane said.

During her visit at the school she handed over a computer lab as well as a television set with a set-top-box as part of the Back to school campaign.

Minister Kubayi-Ngubane encouraged learners to work hard throughout the year.

The Minister condemned the abuse of alcohol by young people.

“You can never become a better person in life if you destroy your own life,” she said.

Minister Kubayi-Ngubane urged learners to take responsibility for their own lives by making choices that will have a positive impact on their futures.

“Take responsibility for your life. Your parents can do as much as they can…your teachers can discipline and instil [good values] in you but unless you are a good recipient, nothing will happen in your life,” she said.

School Principal Jim Gomba expressed his gratitude for the donations provided by the Minister.

He said the computers will benefit the 1496 learners who will use them for research and computer lessons.

“I feel honoured because we have always been neglected by various stakeholders. The only donation we get is directly from the department which is a limited budget.

“Over the years the school has always had a Grade 12 pass rate of between 90% – 100% which we achieved with limited resources so this will assist the school,” Gomba said.

The Minister also thanked teachers who taught her at the school for their guidance. SAnews.gov.za