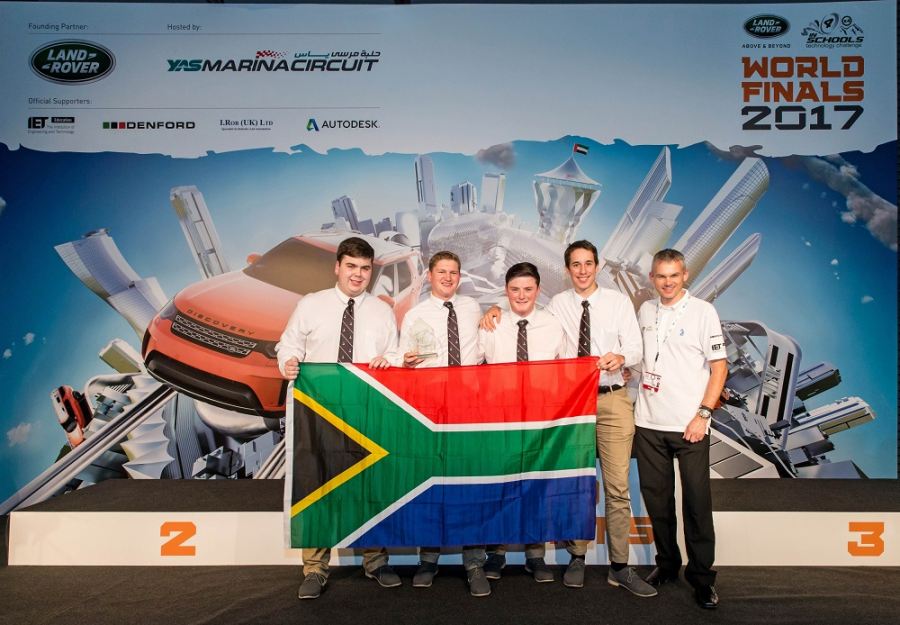 More than 150 future software engineers from schools in 16 countries gathered in December in Abu Dhabi for the world finals of the Land Rover 4×4 in Schools Technology Challenge.

The contest, which supports curriculum learning, reflects Jaguar Land Rover’s commitment to Science, Technology, Engineering and Maths (STEM) subjects and a desire to recruit the next generation of engineers to design and develop future electric, connected and autonomous vehicles. The contest is managed and run in South Africa by Sangari Education.

Bez Sangari, CEO of Sangari Education, explained: “Jaguar Land Rover has launched a global initiative which aims to recruit more than 1,000 electronic and software engineers to its expanding business. In June 2016, the company launched an innovative, mixed-reality recruitment app in collaboration with virtual band Gorillaz to find global future engineering talent. In South Africa the competition is running well and schools are deriving similar benefits to Team Rhino in terms of STEM education.”

Alex Heslop, director of Electrical Engineering, Jaguar Land Rover, said: “I am passionate about engineering and inspiring more young people to consider STEM careers. The Land Rover 4×4 in Schools competition will help us fill exciting future roles in software systems, cyber systems, app development and graphics performance. The new coding challenge is a great way to introduce young people to the importance of software innovation in our business.”

Team Rhino from South Africa won the award for the Best Track Performance. Bevan Roets, team manager, 18, explained: “This award is possibly the toughest in the competition, especially with this year’s four-track judging sessions. Our 4×4 performed well mainly due to the design of the wheels. They were really grippy which helped us on the slippery surfaces. We’ve had an amazing experience in Abu Dhabi and are so proud to take home this award.”

Three students from Maritzburg College in Pietermaritzburg formed Team Rhino in October 2016. The team enjoyed the project style of learning, practical experience and opportunity to pitch to businesses.

Roets added: “Two of us competed in the Land Rover 4×4 in Schools Technology Challenge 2016 and headed to the final full of nerves and excitement. We’ve had lots of support along the way and want to encourage more young people to get involved. We all study design, engineering, graphics and other STEM subjects and all want to become engineers in the future.”

The team spent ten months working on the project and team-work played a vital part in their success. Roets continued, “We’ve spent around 750 hours working on the project as well as juggling revision and exams. Sometimes we disagreed on decisions but negotiated to find the best solution. We used biomimetics to design our car which imitates elements of nature for the purpose of solving complex human problems. It looks like a rhino and we’ve also designed the tyres with separated spokes which have a special rubber compound for extra grip.”

“We’ve all enjoyed meeting new people from different continents and cultures and have been able to develop our solid works design skills, communication skills and also working under pressure. We’ve also improved our coding skills and have written over 100 lines which control our indicators, headlights and a wireless tow bar and have also strengthened our graphic design skills.”

“We were already interested in STEM careers but are now going to work even harder towards our career ambitions. We have been inspired to pursue careers in mechatronics, robotics and engineering.”

“Our advice to other students considering the competition is go for it. The Land Rover 4×4 in Schools competition has broadened our minds and opened our eyes to many new job opportunities and we’re now all passionate about engineering. We’ve had an amazing experience,” said Roets.

The global competition has reached more than three million young people since 2000. Teams qualify for the world finals through a series of regional and national events.