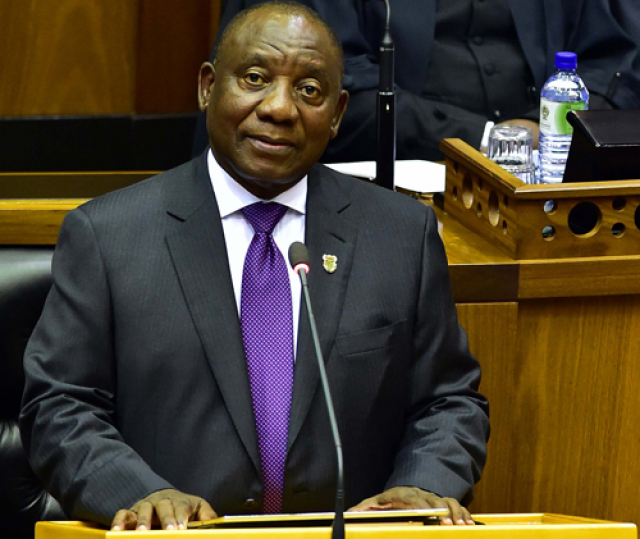 In his maiden speech to the nation since his election on Thursday, President Cyril Ramaphosa has announced a list of swift moves aimed at getting the South African economy growing again, vowing to work with social partners to achieve these targets.

President Ramaphosa addressed a Joint Sitting of Parliament in Cape Town on Friday night, where he outlined practical measures that his administration will embark on to grow the economy and get South Africans to work.

The President announced that one of the initiatives will be to convene a Jobs Summit within the next few months to align the efforts of every sector and every stakeholder behind the imperative of job creation.

The summit will look at what needs to be done to ensure the economy grows and becomes more productive, companies invest on a far greater scale, workers are better equipped, and economic infrastructure is expanded.

“At the centre of our national agenda in 2018 is the creation of jobs, especially for the youth. We are going to embark on a number of measures to address the unemployment challenge,” President Ramaphosa said.

Although South Africa’s unemployment rate decreased to 26.7% in the fourth quarter of 2017 from 27.7% in the previous period, President Ramaphosa believes that only when the economy is growing can a real dent be made on the unemployment figures.

“We will make a major push this year to encourage significant new investment in our economy. To this end, we will organise an Investment Conference in the next three months, targeting both domestic and international investors, to market the compelling investment opportunities to be found in our country,” he said.

Added to the Jobs Summit would be the launch of the Youth Employment Service initiative, which will place unemployed youth in paid internships in companies across the economy.

“Together with our partners in business, we have agreed to create a million such internships in the next three years. If we are to respond effectively to the needs of youth, it is essential that young people articulate their views and are able to engage with government at the highest level,” the President said.

Manufacturing will be the target

At the core of the interventions will be to address the decline over many years of South Africa’s manufacturing capacity, which has deeply affected employment and exports.

Government will seek to reindustrialise on a scale and pace that draws millions of job seekers into the economy.

“We are going to promote greater investment in key manufacturing sectors through the strategic use of incentives and other measures.

“To further stimulate manufacturing, we will forge ahead with the localisation programme, through which products like textile, clothing, furniture, rail rolling stock and water meters are designated for local procurement,” the President said.

He noted that South Africa had already spent more than R57 billion on locally-produced goods that may have been imported from other countries.

A few years ago, government, in an effort to reposition itself in the world economy, established the Industrial Development Zones programme. The programme’s main focus was to attract Foreign Direct Investment and export of value-added commodities. Although there are major achievements with the IDZs, there were weaknesses that led to the policy review and the new Special Economic Zones (ZES) policy.

The policy review and the new SEZ Programme, which began in 2007, was also brought about by developments in national economic policies and strategies such as the National Industrialisation Framework, and the New Growth Path, as well as developments in the global economic environment such as the formation of BRICS.

Industrialisation at the centre of transformation

On Friday night, President Ramaphosa underlined that the process of industrialisation must be underpinned by transformation.

He said through measures like preferential procurement and the Black Industrialists Programme, government is developing a new generation of black and women producers that are able to build enterprises of significant scale and capability.

“We will improve our capacity to support black professionals, deal decisively with companies that resist transformation, use competition policy to open markets up to new black entrants, and invest in the development of businesses in townships and rural areas.”

As expected, President Ramaphosa made time in his speech to outline the implementation of the much-talked about radical economic transformation, a policy adopted by the governing party.

“Radical economic transformation requires that we fundamentally improve the position of black women and communities in the economy, ensuring that they are owners, managers, producers and financiers,” President Ramphosa said.

Government would be pushing the policy to reverse the inequalities created by the country’s history and would ensure the participation of the majority in the economy.