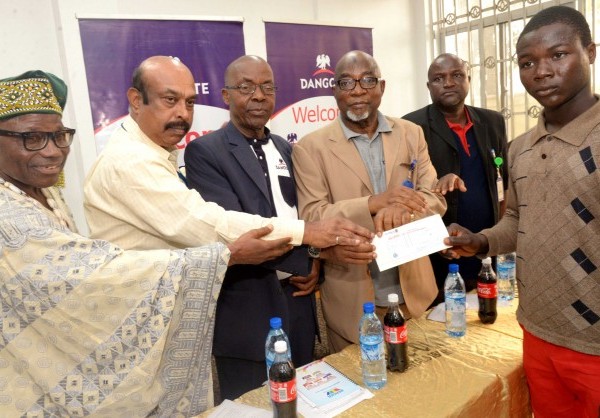 In a major boost to its Corporate Social Responsibility profile, Dangote Cement Plc (www.DangoteCement.com), Ibese Plant has announced a multi-million Naira educational scholarship award for 115 students from its 15 host communities for the 2017/2018 academic session.

The Company said the scholarship has become an annual event meant to contribute to the educational development of the people and the area and position them in right place in the scheme of things in Ogun state and Nigeria in general.

Acting Plant Director of Dangote Cement, Ibese, Mr. Louis Raj, while speaking during the presentation of cheques to the beneficiaries at Ibese Plant explained that the management decided to increase the number of beneficiaries to 115 from the previous 80 so that more children of the area could benefit.

He also said the decision was meant to encourage the young ones to go to school as a sure way of building them mentally and morally so that they be good to themselves and the society.

According to him, the scholarship award is just one of the many Social Services the Company has committed itself to and continue to provide other social services as a way of giving back to the society within which it operates.

Mr. Raj stated that the scholarship award and other CSR projects were being undertaken as a way of saying thanks to the people for maintenance and sustenance of peace in the area pointing out that it was the prevailing atmosphere of peace that make the company to operate smoothly.

He expressed the management gratitude to the royal fathers and other community leaders whose efforts have accounted for the peace and tranquility, noting that the company would wish the spirit of peaceful coexistence continues.

The General Manager, Government and Community Relations, Joseph Alabi while giving the breakdown of the scholarship said the award covered 115 students of Yewa origin studying various courses across several higher institutions of learning in the country.

Some of the schools where the beneficiaries are studying include Polytechnics, Universities, College of Educations, College of Technologies, and secondary schools scattered across Ogun state.

We award scholarships to communities in order to give the communities part of wealth being created
Alabi also announced a list of candidates from the host communities who have been selected to attend Dangote Academy for training in various arts and vocations pointing out that the training will equip them with wherewithal to work and do their own business whenever they chose to.

“In Dangote Group (http://Dangote.com), Corporate Social Responsibility (CSR) to our communities is our watchword and focus. Giving scholarships, construction of roads and drainages, provision of transformers and other projects to connect communities to national grid, among others are what will do every year. We award scholarships to communities in order to give the communities part of wealth being created.”

“I think everything is not about money but the main benefit is to provide them the opportunity to have better education and in the future, if they are good students, well-qualified, we will also offer them opportunities to work here at Ibese Cement Plant. This is part of CSR to ensure good relations, good partnership with our communities,” he added.

In his remark, the Olu of Imasayi, Oba Gbadebo Oni said the host communities are happy with Dangote Cement with its handling of community issues, saying Alhaji Aliko Dangote deserves all the cooperation his people could muster for citing the cement plant in their land and then taking care of the people and the communities.

He promised that his people would continue to give peace a chance always because to whom much is given, much is expected. The Monarch said the education scholarship is the best thing that has happened to the host communities because the issue of quality education cannot be quantified in monetary terms.

The scholarship according to him, has offered a big relief to parents who have to struggle so much to ensure their children school fees are paid, saying they will forever be grateful to the management of Dangote cement.

It would be recalled that the company had some years ago instituted scholarships for the indigenes of any of the host communities in any higher institution and secondary schools with the management saying it was poised to making life more meaningful to all members of the host communities with a promise to ensure that all projects meet the specific need of each community.

Also, the Dangote Cement Plc, Gboko factory in Benue State had also given out N20 million worth of scholarships to indigent students from the firm’s host community, Mbayion, as part of its CSR in the last one year.

Dangote was the adjudged overall winner among 25 Nigerian and multinational companies operating in the country in 2016, scoring 6.3 per cent, followed by Nestle with 5.51 per cent and Etisalat with 5.45 per cent.