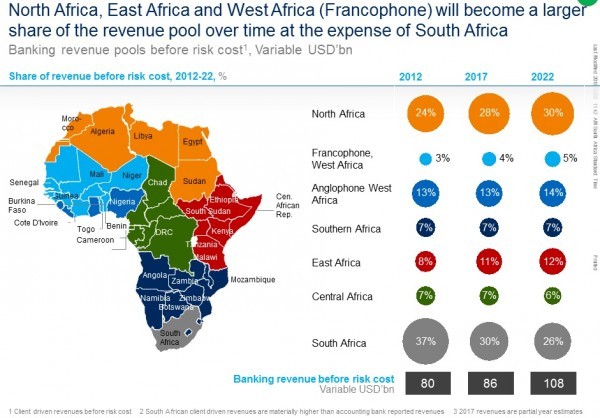 The report finds that Africa’s banking markets are among the most exciting in the world. The continent’s overall banking market is the second-fastest-growing and second most profitable of any global region, and a hotbed of innovation. Nearly 300 million Africans are banked today, a number that could rise to 450 million in 5 years. The report illustrates four segments of African markets – from the advanced markets like South Africa and Egypt, to fast-growing transition markets such as Kenya, Ghana and Cote D’Ivoire, to sleeping giants like Algeria, Nigeria and Angola, to nascent banking markets like DRC and Ethiopia.

The report finds that Africa’s top quintile banks – the so-called “winners” – are simultaneously 4 times more profitable and over 2 times faster growing than bottom quintile banks. The report’s key findings are that these “winners” are defined by employing one or more of five winning practices:

Draw the right map. In Africa, geography matters. About 65 percent of African banks’ profitability (measured by RoE) and 94 percent of their revenue growth are attributable to their geographic footprint. Importantly, the report highlights a shift in exchange-rate adjusted revenue pools North Africa, East Africa and West Africa, and away from South Africa.

Right segments, compelling offers. We find that 70 percent of revenue pool growth will occur in the middle segments, defined as earning between US$ 6,000 and US$ 36,000 in annual income. The mass market – individuals earning less than US$6,000 per annum – accounts for 13 percent of the growth, but is the fastest growing segment. Whichever segment banks choose, having the right proposition is key. Our survey of 2,500 banking customers in 6 African countries finds that 25 percent of customers choose price as the most important factors in choosing banks. Equally important is convenience, also cited by 25 percent of customers. Service is the third most important factor, selected by 12 percent of customers. We also find huge cross-sell opportunities – while 95% of Africans have transaction products, fewer than 20 percent have lending, insurance, investment or deposit products.

Leaner, simpler banking. While African banks’ cost: income has been falling, we find that this is due to rising margins for banks, and their cost-to-assets ratio has actually been worsening. At 3.6 percent, Africa has the 2nd highest cost-to-assets ratio in the world. However, rapid efficiency gains are possible, and we spotlight eight African banks that have made strides in efficiency in the last five years, through a combination of three levers – end-to-end digitisation; sales productivity improvements fuelled by advanced analytics; back- and middle-office optimisation.
Digital first. 40% of Africans prefer to use digital channels for transactions. In four major African countries – South Africa, Nigeria, Kenya, Angola – a higher proportion of Africans prefer the digital channel for transactions to the branch channel. Given low branch density in Africa, banks need to employ a digital first approach. The report hones in on four themes of innovation emerging in Africa on digital – end-to-end digital transformations (e.g. Equity Bank); partnering with telco companies (e.g. CBA in Kenya or Diamond Bank in Nigeria); building a digital bank (e.g. ALAT in Nigeria); and building an ecosystem (e.g. Alipay in China).
Innovate on risk. African banking still has the second highest cost of risk in the world. Poor data availability is part of the problem: 11 percent of Africans are on credit bureaus, compared to in excess of 90 percent in advanced markets. However, we are seeing innovations such as banks partnering with data and analytics fintechs like Jumo to improve credit underwriting; banks partnering with telcos to leverage telco data to issue small-ticket loans on mobile; and players employing payroll lending across countries.
This new report draws on the experience of McKinsey’s partners and colleagues serving banks across Africa; McKinsey’s Global Banking Pools research; a proprietary database of the financial performance of 35 of Africa’s leading banks; a survey of executives from 20 banks and financial institutions across Africa; and a broad-based survey of 2,500 banking customers from 6 African countries – South Africa, Egypt, Nigeria, Morocco, Angola and Kenya.

Agriculture, access to electricity, entrepreneurship will create jobs in Africa –...