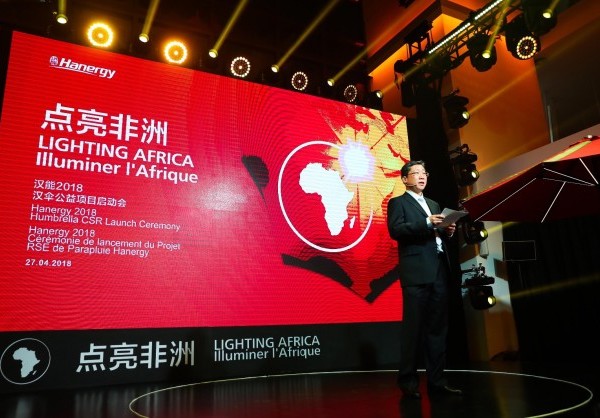 The innovation, meant to light up African villages and provide a cost efficient and environmentally friendly solution compared to other sources of energy, was launched at a spectacular event on the 27th of April 2017

China Clean Energy Company, Hanergy Group, launched a solar powered umbrella dubbed “Humbrella”. The innovation, meant to light up African villages and provide a cost efficient and environmentally friendly solution compared to other sources of energy, was launched at a spectacular event on the 27th of April 2017 at the Hanergy Renewable Energy Exhibition Center, Beijing, China.

Humbrella launch could not have occurred in a more opportune time when the international community is striving to address climate change by implementing an ambitious global agenda with the objective of ensuring access to affordable, reliable and sustainable energy for all by 2030. In addition, on the upcoming Summit Meeting of the Forum on China Africa co-operation, efforts and goals are only re-enforced by the initiative. Ambassador Mamadou expressed his gratitude for the noble Corporate Social Responsibility act by the Chinese company, further stating his country’s intention to foster even better relations particularly regarding partnerships with Chinese companies on renewable energy.

Hanergy Group Holdings is a multinational clean energy company with a wide range of mobile energy solutions, covering hydropower, wind power and solar power. Thin-film solar power research and development has been the main focus at Hanergy since 2009. Nine years later, the Humbrella launches, providing practical solutions to the ever persistent problem of unstable power supply in Africa. The Humbrella converts sunshine and stores as much as 4000 mAh electricity, ensuring a 10 hour high quality reading time for children or charging more than 10 3000 mAh smartphones not to mention the 4 USB ports strategically located on the shaft of the umbrella that could be used to plug in lamps small fans, electric insect repellants among others. The product is not only efficient but also environmentally friendly as it leverages thin-film solar power generation to directly convert solar energy into electricity replacing diesel generators thus achieving “zero emission’ energy.

Vice President of Hanergy Group, Mr. Lyu Yuan shed light on the noble venture he spearheaded as a result of the challenges he encountered during his seven year stay in Africa, “As you know Hanergy has the best film technology and we thought we just want to use this technology for our local friends, you know find their needs. We pushed R and D (Research and Development) people and also marketing people to find the way.” This resulted in the “Lighting Africa” project’s product, Humbrella that combines the world’s highest conversion efficiency thin-films solar panels with the common umbrella. The Humbrella combines four functions including off-grid power supply, electricity storage, night lighting and terminal charging. The 2.7 meters wide and 8.8 kg heavy innovation is bound to offer a revolutionary alternative to African homes that lack the vital power supply for duties around the homestead however most important to enable the smooth studying of the children.

President of Hanergy Global Application Product Development Center, Mr. An Rongbang, addressed one major concern which is the capability of the Humbrella to be used on cloudy days, with little to no sunlight. “Under the weak light our solar panel can still work. If there is a cloudy day, still there is light outside but the amount of electricity will reduce but still be produced. At the same time if you want to use huge electricity, both solar panel and stored battery will work together.”

The world’s largest clean energy company, Hanergy Group, concussively pledged to roll out over one million Yuan worth of Humbrellas to children in Africa within a time span of 2 months and expressed its excitement to better foster the China- Africa relations, changing the world’s thin film solar energy at a time.

Minister for Africa urges Sierra Leone to invest in next generation...