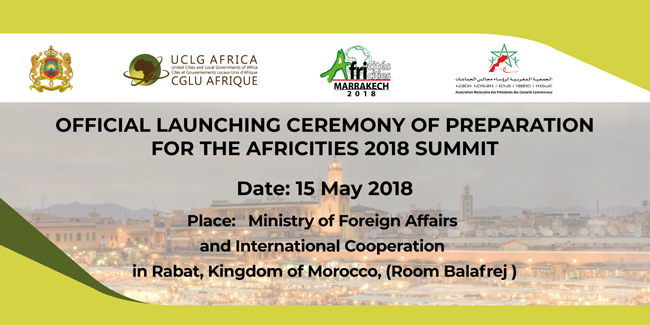 The theme of the Summit will be: “The transition to sustainable cities and territories: The role of African local governments”

The official ceremony to launch the preparation for the 8th edition of the Africities Summit, November 20-24, 2018, Marrakesh, Morocco will take place on Tuesday, May 15, 2018, 3:00- 5:30 pm at the Balafrej Hall, the Ministry of Foreign Affairs and International Cooperation in Rabat, Morocco. The theme of the Summit will be: “The transition to sustainable cities and territories: The role of African local governments.”

The ceremony will be organized by the Moroccan Association of Presidents of Municipal Councils, (AMPCC), and the United Cities and Local Governments of Africa, (UCLG Africa) (www.UCLGA.org).

The following dignitaries will take part in the ceremony:

– His Excellency Mr. Abdelouafi Laftit, Minister of the Interior of the Kingdom of Morocco;

– His Excellency M. Barnabé Zinsou Dassigli, Minister of Decentralization and Local Governance of the Republic of Benin, President of the STC8 Commission of the African Union;

– Mr. Mpho Parks Tau, President of the World Organization of United Cities and Local Governments (UCLG) and Vice-President of UCLG Africa for the Southern Africa Region;

The ceremony will also see the participation of other distinguished guests, including: African ministers who are members of the African Union’s Specialized Technical Committee for the Public Service, Urban Development, Decentralization and Local Government (STC 8); the presidents of the associations of local and territorial authorities of Africa; the mayors and governors of the metropolitan cities of Africa; the members of the Pan-African Council of UCLG Africa; the members of the Network of Locally Elected Women of Africa (REFELA); the Secretary General of the International Association of Major Metropolises (Metropolis); representatives of the diplomatic corps; international organizations present in Morocco; as well as representatives of parliament and civil society organizations and the private sector.

The ceremony will take place in the Balafrej Hall of the Ministry of Foreign Affairs and International Cooperation of the Kingdom of Morocco.