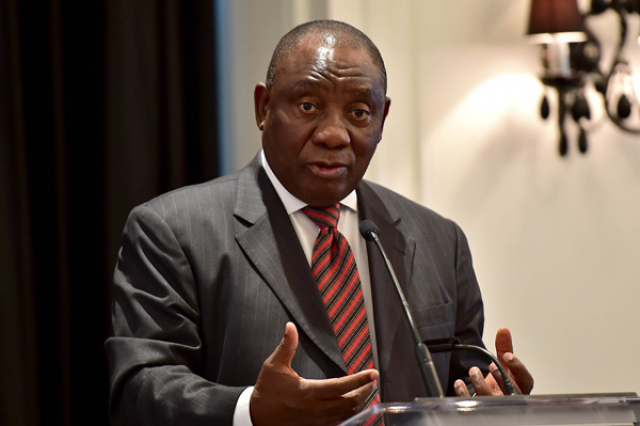 Attracting investment to grow the economy, creating jobs and addressing poverty and inequality in South Africa will be top of mind as President Cyril Ramaphosa participates in the G7 Leaders’ Summit Outreach in Toronto, Canada.

The President arrived in the country on Friday ahead of the two-day session hosted by Canadian Prime Minister Justin Trudeau.

“The focus of the G7 Outreach meeting on healthy, productive and resilient oceans and seas, coasts and communities, is in line with the goals outlined in South Africa’s National Development Plan and speaks to the country’s efforts to stimulate economic growth and job creation by, amongst others, unlocking the oceans economy through Operation Phakisa,” said the Presidency.

President Ramaphosa commenced his visit by engaging with investors and business people in Toronto.

He told guests at the engagement that South Africa, which sees Canada as a strategic partner, has entered a new era in which the economy is centre stage.

“Business confidence and investor sentiment is improving. Government is responding to create a dynamic and enabling business environment that will promote greater productive investment. South Africa is undertaking measures to set the economy on a new path of growth, employment and transformation.

“We are moving swiftly to restore credibility, improve governance and implement turn around strategies at South Africa’s state-owned enterprises,” he said.

Government is working with urgency to guide the economy towards a more sustainable growth trajectory and to restore South Africa to investment grade status.

“We are working to significantly increase the levels of fixed investment in the economy. We know that foreign direct investment is a critical driver of economic growth for both developing and developed economies.

“It strengthens productive capacity through transfer of technology and knowledge, the creation of job opportunities, improvements in human capital and enhanced production processes. Greater capital inflows generate greater trade flows, and with it the opportunity for a country like South Africa to derive greater value from its mineral, agricultural and other resources,” said President Ramaphosa.

It is for this reason that government has embarked on an investment drive that aims to raise US$ 100 billion over the next five years and appointed four special envoys on investment that will meet potential investors both in South Africa and in major financial centres.

“South Africa has embarked a new path of renewal and growth. We are hard at work to remove the constraints that have held us back and to create new opportunities for growth.

“South Africa is open for business. We anticipate a new wave of investment in our economy and in our region over the next few years,” President Ramaphosa said, who encouraged Canadian companies to join the wave and reap the rewards of investing in a country and a continent on the rise.

On Saturday, the President will participate in a working session at Le Manoir Richelieu in La Malbaie in the Charlevoix region followed by a working lunch.

The G7 consists of Canada, the United States, Japan, the United Kingdom, Germany, France and Italy. Other states, whose leaders have been invited to participate in the Leaders’ Summit Outreach, include Kenya, Senegal, Rwanda, Seychelles, Haiti, Bangladesh, Vietnam, Samoa, Argentina, Norway and Jamaica.

Roaring to life: Growth and innovation in African retail banking

Mini Grids Deployment in Sub-Saharan Africa to be Boosted at Nairobi...