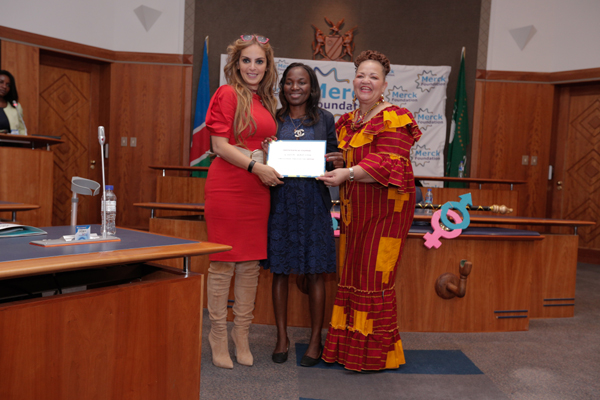 Merck Foundation appoints the Chairperson of National Council of Namibia, as an Ambassador of Merck More than a Mother in the country

Merck Foundation launches their ‘Merck More Than a Mother’ to build fertility care capacity and break the stigma around infertile women.

Merck Foundation appoints the Chairperson of National Council of Namibia, as an Ambassador of Merck More than a Mother in the country.

Merck Foundation will work closely with ministry of education to include Infertility prevention awareness in adolescence education.

Merck Foundation, the philanthropic arm of Merck KGaA Germany launched today their ‘Merck More Than a Mother’ program in Namibia in partnership with the Chairperson of National Council of Namibia, Hon. Margaret Mensah and the Ministry of Health.

Dr. Rasha Kelej, CEO Merck Foundation emphasized, “The time is ripe for a shift in mindset around the issue.”

“Not only husbands mistreat women [due to infertility], mothers-in-law and sisters-in-law can also influence their son or brother to harass his wife because she cannot have children. All this has to change,” she said.

She added that they not only focusing on the education of adolescence about infertility prevention, but and make Infertility as it looks toward the future.

“What about the present? We are also calling on Members of Parliament to advocate for this in their communities. A little bit of information which takes one minute can save lives, happiness, and can change culture and beliefs around you.”Dr. Kelej said.

She further said the media could play a crucial role in sensitizing citizens on infertility, its prevention and the role of men and women in the fight. Therefore, we are going to launch media recognition award and media training program to prepare the media to advocate and raise awareness with the aim to break the stigma around Infertility in Namibia.

Not only husbands mistreat women [due to infertility], mothers-in-law and sisters-in-law can also influence their son or brother to harass his wife because she cannot have children
Merck Foundation has appointed Hon. Margaret Mensah-Williams, as the ambassador of ‘Merck More Than a Mother’ campaign in the Republic of Namibia, to work with Merck Foundation in defining interventions, and to break the stigma around childless women across the country. Together we will transform the lives of unprivileged women, who suffered infertility stigma all their lives.”, Dr. Rasha Kelej said.

Speaking at the same occasion, National Council Chairperson Margaret Mensah-Williams indicated that infertility is a reality in Namibia and should be addressed.

She also said that women who are unable to conceive do not owe anyone an explanation.

“Don’t care. Shine your shine. You don’t owe anybody an explanation. If God decides the time for you to bear a child, you shall bear that child. Don’t worry about people when they talk. They talk about us every day. You know what? I don’t care. I shine.” she said.

“Infertility is profoundly prevalent in sub-Saharan Africa, which is said to have an “infertility belt” wrapped around its center, the infertility rate is much higher in southern Africa. Particularly in Namibia infertility prevalence rates for some ethnic groups is as high as 32 percent, or one-third of all couples attempting to conceive, which is why initiatives like ‘Merck More than a Mother’ are significant for Namibia and we are glad to partner with Merck Foundation for this initiative.” She explained

She further added, “It is a proud moment for me, to be selected as Merck More Than a Mother ambassador for Namibia. I will work closely with Merck Foundation to break the stigma around infertility at all levels.”

Merck Foundation through ‘Merck More than a Mother’ initiative will provide three months to six months clinical and practical training to healthcare providers to create fertility specialists in Namibia. Merck foundation will also provide training for nurses to be fertility counselors.

About ‘Merck More Than a Mother’ campaign; In many Cultures, childless women suffer discrimination, stigma, and ostracism. Their inability to have children results in great isolation, disinheritance, and assaults. “Merck More Than a Mother” empowers such women through the access to information, health, change of mindsets and economic empowerment.

Merck Foundation provided for more than 50 candidates, three months to six months clinical and practical training for fertility specialists and embryologists in more than 17 countries across Africa and Asia.

Minister Davies Arrives in the Republic of China to Attend BRICS...