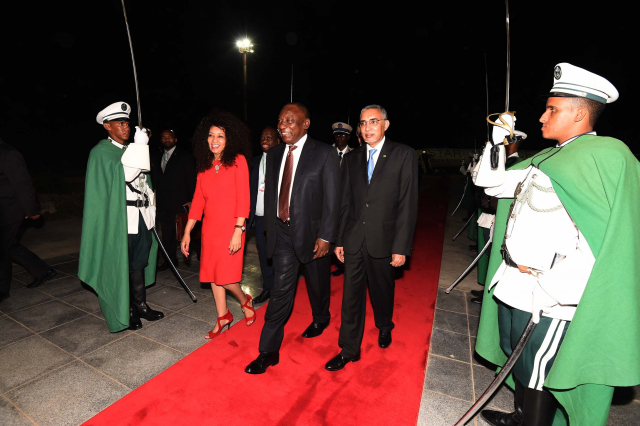 President Cyril Ramaphosa arrived in Nouakchott, the capital city Mauritania on Saturday ahead of the 31st African Union Heads of State Summit taking place there.

The theme of the two-day Summit is: “Winning the Fight against Corruption: A Sustainable Path to Africa’s Transformation”. As in every year, the Heads of State Summit was preceded by the 36th Ordinary Session of the Permanent Representatives’ Committee which took place from 25 to 26 June and the 33rd Ordinary Session of the Executive Council from 28 to 29 June.

The Presidency said the summit presents a unique opportunity to reflect on and address specific challenges related to the fight against corruption on the continent.

The meeting is expected to deliberate on a number of issues, including the institutional reform and financing of the African Union; Peace and Security on the Continent; developments related to the African Continental Free Trade Area (AfCFTA); the African Common Position on negotiations of a new cooperation agreement between the African, Caribbean and Pacific (ACP) developing countries and the European Union (EU) Post-2020 and the adoption of the 2019 African Union Budget,” said the Presidency.

“President Ramaphosa will today participate in a meeting of the African Union High-Level Ad Hoc Committee on South Sudan on the margins of the Summit.

“He is also expected to participate in an event to mark the centenary celebration of former President Nelson Rolihlahla Mandela,” said the Presidency.