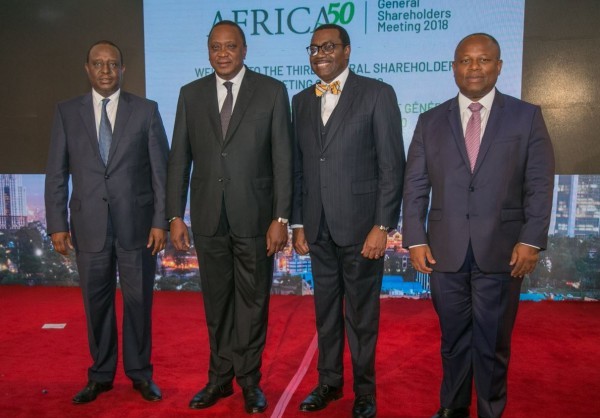 President Uhuru Kenyatta has made an urgent call for developing and funding bankable infrastructure projects to drive Africa’s growth agenda.

“The private sector must step up and help us close the infrastructure gap on the African continent. Public funding is limited, and there are competing priorities,” he said.

Kenyatta announced Kenya would double its current shareholding investment in Africa50 to US$ 100 million. “We must have the confidence to trust and invest in our own infrastructure. Let us grow our partnership and make Africa50 a success.”

According to statistics provided by the African Development Bank (AfDB.org) the continent’s infrastructure funding requirements stand at close to US$ 170 billion a year, leaving a financing gap of US$ $68 – 108 billion.

African Development Bank President and Chairman of Africa50, Akinwumi Adesina, said, “We need to act with speed and urgency. Our people expect nothing else.” He emphasized the importance of tackling factors that inhibit private sector infrastructure investments, including high costs of financing, weak regulations, lack of cost reflective tariffs, low profitability, and weak regulatory frameworks for public-private partnerships.

The private sector must step up and help us close the infrastructure gap on the African continent. Public funding is limited, and there are competing priorities
Private sector infrastructure financing in Africa remains low, averaging US$ 6 billion per year. In 2016, the figure dipped to US$ 2.6 billion.

Adesina said Africa requires new models of financing infrastructure. “We must work smart to attract greater levels of investment financing for infrastructure development in Africa. Globally, there is approximately a US$ 120 trillion pool of savings and private equity. Africa must creatively attract some of this into the continent,” he said.

In response to Africa’s infrastructure finance deficit, the African Development Bank has launched the Africa Investment Forum (AIF) set to take place in South Africa in November 2018. The transaction-based forum is expected to be a gathering of global pension funds, sovereign wealth funds and institutional investors, and key private sector players.

Adesina commended President Kenyatta for the country’s bold commitment to and investments in infrastructure development over the last 5 years. Infrastructure accounts for 77% of the Bank’s Kenya portfolio.

“Mr. President, you were one of the first African leaders to support the creation of Africa50, which I am honored to chair,” said Adesina. “The African Development Bank, of which I am President, helped create Africa50 because we believe new institutional models are needed to close Africa’s huge infrastructure financing gap. Africa50 will be a game changer on infrastructure financing.

He urged countries that have not yet become shareholders of Africa50 to do so. Africa50 currently has a shareholding base of 25 African states.

Three years after its founding, Africa50 has become a key player in driving infrastructure investments, with commercial rates of return in Africa. It has mobilized over $850 million in infrastructure investments and expects to mobilises uptp US$3 billio through its private sector window. Africa50 has made major investments in a number of shareholder countries, including Egypt (400 MW solar power plants), Nigeria, Senegal and Kenya, among others.