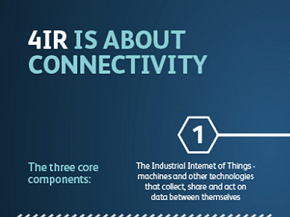 THE Deputy Minister of Higher Education and Training, Buti Manamela, hosted young South African innovators and entrepreneurs at a Youth Colloquium at Gallagher Convention Centre, north of Johannesburg on Friday.

The colloquium was held during government’s jobs summit, held at the same venue, where Manamela talked of the future skills and jobs required for the implementation of government’s Fourth Industrial Revolution (also referred to as 4IR) policy.

He said the policy was underpinned by a developmental agenda, adding that appropriate changes would be made to the school and TVET College syllabus where subjects such as coding and robotics welding, among others, would be introduced.

The talk shop was hosted by the BRICS Business Council, merSETA as well as the department as part of the inaugural, week-long BRICS 2018 Future Skills Challenge.

Over three days they pitted their skills against each other in fields such as cyber security, data analytics, automation, industrial robotics, 3D printing and drone technology as well as other future skills in the engineering, transport, ICT and manufacturing sectors.

Manamela said “the collaboration of young people in skills development, innovation and entrepreneurship has a potential to provide solutions to many of our development challenges.

”He said: “The major fear of 4IR is that more than 5 million jobs will be substituted … and that big companies are run by robots. But, we need to think differently about our future world, as to how we prepare our youth and our country.”

He said this was why future job sets and skills needed to be identified and training is offered to the youth to ensure there are employment opportunities in the future.

Senior researcher for the Moja Research Institute, Fazlin Fransman, said Artificial Intelligence, mobile supercomputing, driverless cars, The Internet of Things and neuro-technological brain enhancements, among others, was “evidence that dramatic change is all around us and it’s happening at an exponential speed.

”She said 4IR was different to previous industrial revolutions that made mass production possible and brought digital capabilities to billions.“

The Fourth Industrial Revolution is characterised by a range of new technologies that are fusing the physical, digital and biological worlds – thus impacting all disciplines, economies and industries. The resulting shifts and disruptions mean that we live in a time of great promise and great peril.

”Fransman said that, on the positive side, the world now had the potential to connect billions more to digital networks, reduce inequality and even manage assets in ways that “potentially undoes the damage of previous industrial revolutions.

“However, it also has the potential, if not underpinned by a developmental agenda, to widen inequality, create mass unemployment and further divide the world into the haves and have nots.

”As such, she said, what is required is “governance frameworks, protocols and policies that ensure inclusive and equitable benefits”.

Nolo Mokoena, CEO of Grind Africa, an advocacy initiative focusing on youth skills development that has partnered with Standard Bank, said South Africa needed to figure out “how do we train young people to acquire the skills that places them at the forefront of the new world we would be inhabiting”.

He said the youth is mainly affected by 4IR.

“And, unless we have a youth-centric approach to understand it, we will get it wrong. We need to understand the industrial trajectory and economic history of South Africa. Typically, issues of reform like this get lost in public discourse because we see political management rather than political leadership. We need to ask ourselves how do we get young people working and how we prepare our youth for the economy of the country.”

merSETA executive, Ester van der Linde, said the colloquium was an important first step in mapping out government’s jobs roadmap for the future.

“Its policies on the Fourth Industrial Revolution is aligned to that of BRICS. However, it was crucial that young innovators, students and entrepreneurs engage with the policy makers to highlight impediments to what they can do.

merSETA is one of the best-performing SETAs that facilitates skills development in, among others, auto manufacturing, metals and engineering, tyre manufacturing, motor retail and components manufacturing as well as in the plastics industries.