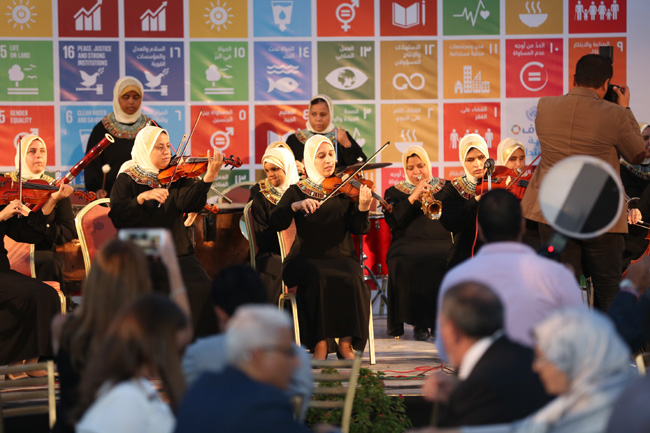 The celebration also featured a bazaar featuring products developed with the technical support of various UN Agencies, Funds and Programmes and their partners

The United Nations in Egypt in cooperation with the Egyptian Ministry of Foreign Affairs, organized a ceremony under the slogan “United for a Sustainable Future” at the Opera house in Cairo yesterday. The celebration was on occasion of United Nations Day which is held on October 24th every year to mark the anniversary of the entry into force of the UN Charter in 1945. Egypt is one of the 50 founding members of the United Nations and currently hosts more than 20 UN organizations working in partnership with the Government of Egypt to achieve its national development priorities.

The ceremony began with the screening of the UN Secretary General message marking the organization’s 73rd anniversary, followed by a documentary about Egypt’s achievements during its membership in the UN Security Council for the years 2016 and 2017. In addition, results of the work carried out by the UN family in support of Egypt’s national development priorities over the past 5 years from 2013-2017 were presented.

In a statement delivered on his behalf by Ambassador Ehab Fawzy, Assistant Foreign Minister for Multilateral Affairs and International Security, H.E. Minister of Foreign Affairs confirmed that this day “symbolizes the collective awareness of humanity for the need to work together in partnership and equality to protect the principles of international peace and security and to succeed in achieving prosperity and preserve human dignity”. He added that “today’s celebration is of special importance as we sow together the fruit of the partnership between Egypt and the United Nations in achieving the Sustainable Development Goals.”

In addition, results of the work carried out by the UN family in support of Egypt’s national development priorities over the past 5 years from 2013-2017 were presented

The United Nations Resident Coordinator, Mr. Richard Dictus, praised Egypt’s development efforts stating that “in a time of rapid change that is coupled with both challenges and opportunities, Egypt is at the forefront of utilizing its assets, such as its young women and men that are vibrant, resourceful and innovative; natural resources such as the rich agricultural lands of the Nile delta, and its heritage through its rich and sophisticated history”. Mr. Dictus referred to the achievements of the partnership between the UN in Egypt and its national and international partners together with the Government of Egypt which included reaching more than 40 million people. He stressed that “more than 65 percent of the UN’s total interventions were concentrated in rural Upper and Lower Egypt where more than half of the population are below the national poverty line, highlighting the significance of leaving no-one behind.”

A photo exhibition was setup by UN Agencies, Funds and Programmes. This exhibition highlighted the development contributions made throughout 2017 with national and international partners. The exhibition included a pavilion for the international exhibition “People on the Move” launched on UN Day by the UN globally to illustrate the increasing number of migrants worldwide (258 million) and refugees (more than 22 million) and forced displacement (around 40 million).

The celebration also featured a bazaar featuring products developed with the technical support of various UN Agencies, Funds and Programmes and their partners. The beneficiaries showcased their products, through handicrafts, organic food, clothing and more, allowing all stakeholders to engage with one another.

In line with the Egyptian initiative designating 2018 as the year of People with Disabilities (PWDs) and the year before, 2017, as the year of Women, the Al Nour wal Amal Orchestra, consisting of 40 blind and visually impaired women, performed a variety of magical musical pieces demonstrating the remarkable talent of PWDs, highlighting the significance of ensuring an inclusive society where all people have a platform to showcase their talents.