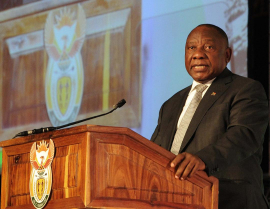 The proof of the pudding lies in the eating, they say. For the 10 million South Africans who are unemployed, the outcomes of the recent Jobs Summit provide a beacon of hope – but only if the implementation agreed upon is followed through, writes Keamogetse Kgomanyane.

The two-day summit, convened by the National Economic Development and Labour Council (NEDLAC), brought together key social partners such as government, business, labour and communities, to mull ways to address the unemployment crisis South Africa faces.

Emerging from the summit was a bold commitment to create 275 000 direct jobs a year. And the plan of action on how the jobs will be created is contained in an 84-page framework agreement.

In the first half of 2018, the economy shrank by 0, 8% – ushering the country into a technical recession.

Shortly after the declaration by StatsSA that the country slumped into a technical recession, an economic stimulus package and recovery plan were announced by President Cyril Ramaphosa.

The summit came on the back of the announcement of the package – sharing a common purpose to restore economic growth and create much-needed jobs.

In light of this, the framework agreement is peppered with measures that will be undertaken to stave off retrenchments, retain and protect already existing jobs, grow the economy and create much needed jobs.

Speaking to SAnews, Nedbank Economist Isaac Matshego says while the agreement does not expressly contain any new interventions, he hails it as a step in the right direction in as far as implementation is concerned.

“The Jobs Summit, if anything, was really encouraging as it showed government’s commitment or rather re-commit to plans set out in its National Development Plan.

“I mean implementation has been (almost) non-existent for years. These plans have always been there in government policies, budgets and departmental policies. But now there is a clear effort to implement,” he says.

The interventions include measures such as “boosting domestic demand” by increasing local procurement by both government and business.

Addressing delegates at the summit, President Ramaphosa said the bid to boost domestic demand by buying local, essentially means that South African companies, government and consumers must back local producers and buy local.

Government committed to simplify and speed up the process for the designation of products for local procurement. Organised labour, in partnership with Proudly SA, is set to proactively identify opportunities for new designations.

As part of this agreement, a number of companies threw their hat in the ring and committed to buy local as part of their operational strategies.

Highlighting small businesses as the fuel of economic growth and the real engines of job creation, the summit expressed the need to support such enterprises.

While the policy of ensuring government and business pay small businesses within the stipulated 30 day period is nothing new, the agreement makes provision to track compliance.

In line with this measure, Business Leadership South Africa is now tasked with ensuring that social partners comply.

Furthermore, government committed that it will continue to assist and monitor the implementation of the 30% set aside for Small Medium and Micro Enterprises (SMMEs) by all spheres of government and their agencies.

In the metals, mining and machinery sector, government agreed to finalise an export tax on scrap metal to ensure better access to incentives such as the Downstream Steel Industry Competitiveness Fund.

Other value chains that are receiving focused attention include sub-sectors of the manufacturing industry in clothing, textiles, leather and footwear, furniture and the automotive industry.

Organised labour, through one of its member unions, plans to open a union-owned clothing factory in the Eastern Cape within the next two years.

The initiative is estimated to create around 100 jobs initially and aims to contribute to the re-industrialisation of a province that suffers from widespread poverty and unemployment.

Reflecting on these measures, Matshego says to boost the economy, it is vital that the country looks to developing other sectors, especially industries such as manufacturing.

“By developing these sectors, it will allow us to operate across the whole value chain. So far, we are still stuck in producing raw materials or the first phase of production. We don’t add value.

“We need to move up to where there is value addition because that is where the jobs are. We need to be more competitive and move up the value chain.”

Another highlight of the framework agreement is the commitment by the financial sector to invest R100-billion into black enterprises and firms with BEE level six and above, within the industrial sector.

The intervention outlines that government will work with the financial sector to develop facilities for financing at preferential rates and extended repayment terms.

Reflecting on youth unemployment in the first quarter of 2018, StatsSA described it as a “global phenomenon.”

To combat these statistics, President Ramaphosa in his maiden State of the Nation Address, highlighted that jobs and skills – especially for the youth, will be at the centre of the 2018 national agenda.

Among the practical actions devised in the framework agreement to address youth unemployment are the strengthening of youth employment initiatives such as Harambee and the National Youth Employment Service.

Harambee, working with all social partners, is set to strengthen its management system to ensure that 1.5-million young people are part of an active network of job seekers and that 500 000 young job-seekers are able to enter first jobs or are on pathways to generate an income to sustain themselves.

So just how will implementation – which is championed as the real win of the agreement be rolled out?

Enter the Presidential Jobs Committee. The committee will serve as the implementation arm of the framework agreement.

A quarterly report detailing progress on the implementation of the action plans will form part of the committee’s work. In addition, the committee will take remedial action where required.

While the committee will provide oversight and monitor progress, Matshego emphasised that implementation must take place at the heart of service delivery points.

“National and provincial governments are where delivery takes place, the top guys have to crack the whip but it’s the foot soldiers that ensure implementation. The President and Ministers can talk all their want about policies and plans but government officials have to get down to business and do their work,” he says.

While the framework agreement does not expressly state that the job creation efforts are about creating temporary or permanent jobs, Matshego says while temporary jobs assist in alleviating the strain, it is permanent jobs in the formal sector that will directly address the staggering 27.2% unemployment rate.

“It is temporary jobs through programmes such as the Expanded Public Works Programme that create jobs to a certain extent, especially when you travel and see people at work in the rural areas where we don’t have industrial jobs,” he says.

Matshego argued that to fully realise an improvement in unemployment, the formal sector must be bolstered.

“When we create jobs in the formal sector, we create steady jobs that allow people to spend and even create other jobs.

“Once we create formal jobs we will be halfway to tackling unemployment because it has such a great knock on effect,” says Matshego.

With new entrants into the labour market every year, Matshego says the set target of 275 000 direct jobs per year is a drop in the ocean but provides a stepping stone for greater change.

“If we are being honest, the target number of 275 000 direct jobs per year is a drop in the ocean especially if one considers that the labour market expands every year with new entrants, but it is a good start to ensure we gain momentum,” he says.

And on when the agreement will begin to bear fruit, Matshego says it is important that people note that job creation is a process.

“It is not going to happen in the next few months, next year or in the next five years – because job creation is an accumulative process but the work starts now and we have to start somewhere,” says Matshego.