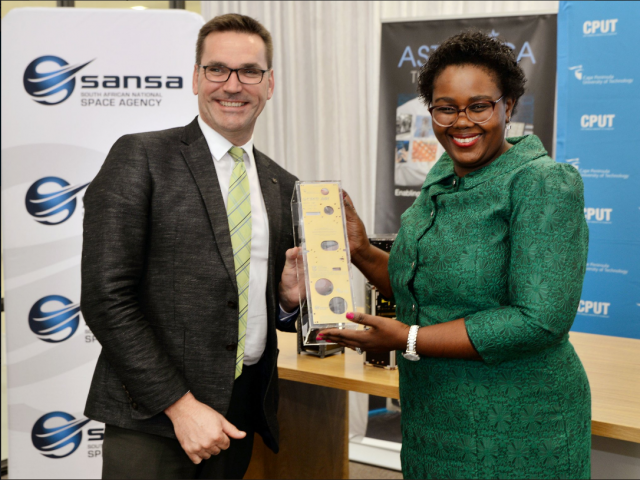 South Africa’s most advanced nanosatellite to date, ZACube-2, is scheduled for launch into space on 27 December, with the Russian Soyuz Kanopus mission from Siberia, Russia.

The ZACube-2 will be launched together with small satellites from the United States, Japan, Spain, and Germany and will be orbited as secondary payload in a launch mission designed for real-time monitoring of natural and manmade disasters and other emergencies.

ZACUBE-2, described as the most advanced on the continent, will provide cutting-edge remote sensing and communication services to South Africa and the region.

Weighing just 4kg, the ZACube-2 is South Africa’s second nanosatellite to be launched into space and three times the size of its predecessor, TshepisoSat. It is regarded as the continent’s most advanced cube satellite and is in fact a precursor to the MDASat – a constellation of nine nanosatellites that will be developed to provide cutting-edge very high frequency data exchange communication systems to the maritime industry.

The project, which is funded by the Department of Science and Technology (DST), supports Operation Phakisa. The DST’s entity, the South African National Space Agency (SANSA), in cooperation with the University of Montpellier, the French Embassy and the Paris Chamber of Commerce, manages the project.

In April this year, the Minister of Science and Technology Mmamoloko Kubayi-Ngubane, attended the send-off ceremony and met the team young people who worked on the Zacube-2. At the time, the nanosatellite was scheduled for launch from India, in June 2018. Excess capacity induced by primary and secondary payloads on India’s Polar Satellite Launch Vehicle, resulted in a delay and an alternative arrangement was made.

“The launch of ZACube-2 represents a significant milestone in the nation’s ambition to becoming a key player in the innovative utilization of space science and technology in responding to government priority areas,” said Minister Kubayi-Ngubane.

The satellite is a technology demonstrator for Maritime Domain Awareness (MDA). It will monitor the movement of ships along the South African coastline with its automatic identification system (AIS) payload. The AIS navigational data will be provided to the South African Government in support of its broader Operation Phakisa initiative to grow our maritime economy. The satellite also carries a camera that will detect veld fires from space.

“This is the most technological advanced nanosat that will provide critical information for our oceans economy (Operation Phakisa). I am particularly excited that the satellite was developed by some of our youngest and brightest minds under a programme representing our diversity, in particular black students and young women.”

The ZACube-2 will be given a new name soon, following a national satellite naming competition launched in April by the South African Agency for Science and Technology Advancement (SAASTA), an entity of the DST. SAASTA received over 300 entries from Grade 4-12 learners. The results have been finalised and the new name of the nanosatellite will be announced in due course.

Cubesats are extremely small satellites, in the form of 10 cm cubes and with a mass of up to 1 kg (although there are some made up of two or three such cubes). Developed originally in the US, they are becoming increasingly popular with universities and technological institutes around the world, because of their considerable educational benefits. These tiny satellites have come a long way since Sputnik, the first satellite that was launched in 1957, weighing 83 kg. The success of the CubeSat programme has revolutionised space technology.

Cubesats provide both hands-on experience for engineers and technologists in their design and construction, and, once in orbit, the data needed to support scientific experiments and projects.