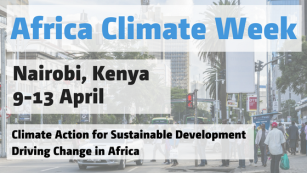 The Climate Week will attract Ministers, policymakers, and non-Party stakeholders from businesses, community initiatives, financial institutions, and city municipalities across the African continent

Plans for the high-level segment at Africa Climate Week in Accra’s International Convention Center are now taking shape. On the morning of Wednesday, 20 March, the week will be formally opened by the President of Ghana, Nana Akufo-Addo; Ghanaian actress and television personality, Joselyn Dumas; and COP24 President Michał Kurtyka.

This curtain-raising ceremony will introduce a series of discussions throughout the course of the day that will feature prominent leaders, seeking to unlock barriers around enhanced national climate ambition, as well as issues relating to carbon pricing and markets. A new in-depth program, detailing Wednesday’s activities and also the sessions for the remainder of the week, has now been published here.

To date, the event has attracted upwards of 1,500 registrations — far surpassing previous attendance figures and hinting at the renewed significance of the Climate Weeks in relation to driving regional action to implement the Paris Agreement.

The Climate Week will attract Ministers, policymakers, and non-Party stakeholders from businesses, community initiatives, financial institutions, and city municipalities across the African continent.

Africa is being severely impacted by climate change

To support these record participation numbers, United Nations Volunteers today put out a call for energetic people to facilitate the delivery of the Climate Week. Full details of the tasks involved, as well as information on how to apply, can be found here.

The Accra event will act as a focal point for actors to showcase groundbreaking solutions to climate change. For example, a Pitch Hub and Knowledge Corner – located in the heart of the Convention Center – will provide a stage for specialists from Non-Governmental Organizations (NGOs), climate change initiatives, and civil society organizations to share ideas with attendees.

Meanwhile, the youth will enjoy a strong presence at the Climate Week – leading on a number of side events to highlight youth-led initiatives, and will also convene a climate march to coincide with Wednesday’s high-level segment.

Africa is being severely impacted by climate change. From floods in the Lake Victoria basin to drought in Somalia, to environmental degradation in the Sahel region, climate change is a particular threat to continued economic growth and to livelihoods of vulnerable populations across the continent. However, while Africa is one of the lowest contributors to global emissions, it is leading the way by mitigating and adapting to climate impacts through climate action initiatives – examples of which will be displayed at the conference center.

The upcoming Africa Climate Week in Accra is the first ‘Regional Climate Week’ to be hosted this year which will be followed by the Latin America and the Caribbean and Asia-Pacific Climate Weeks. Collectively, these Climate Weeks will serve as critical stepping stones in the lead-up to the UN Secretary-General’s Climate Action Summit in New York in September 2019.