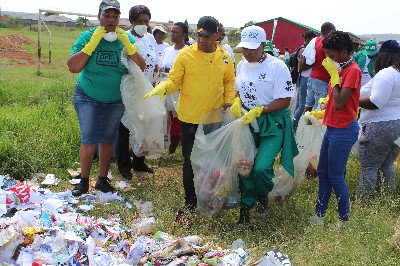 As the campaign to clean up South Africa gains momentum, school children are not being left behind.

Together with departmental officials, Zulu answered President Cyril Ramaphosa’s call for the entire country to take part in the massive clean-up campaign, which seeks to change people’s attitudes, behaviour towards responsible waste management, and keeping their neighbourhoods clean, green and safe.

Back in Gauteng, Zulu led the campaign by visiting Ramahlale Primary School in Mamelodi, where she conducted a waste management programme and planted the first tree at the school to promote green living open spaces for learners.

The Minister said cleaning the country has to start at school level.

“We are here to share with the little children and educate them about cleaning the nation. It also means cleaning their homes, the streets, and their villages and town. When we were growing up, we used to clean up our schools.

“… We need to teach our children to take responsibility, both at home and at schools,” Zulu said.

During the clean-up, the Minister announced that the department would adopt a school. She appointed a few learners to be ambassadors of the Good Green Deeds programme, challenging them to monitor and ensure its sustainability.

Zulu said the school was chosen for the programme because the department, as well as the Small Enterprise Finance Agency (SEFA) and Small Enterprise Development Agency (seda), have projects that support cooperatives in the area.

Grade 7 learner Phillipine Mulaudzi stressed the importance of keeping the environment clean to avoid the spread of diseases.

“We must keep our environment clean because if we litter, we are going to get sick and people will end up dying. I’m happy that the Minister came to our school to launch the campaign. It is the first time I meet any Minister,” Mulaudzi said.

“We are very excited and humbled to be part of this whole project. The [officials] will be able to teach our learners how to clean. It is very important to keep our environment clean and hygienic, so that our learners can live healthily, and grow better,” Malefahlo said.

SA: A toast to women in Science