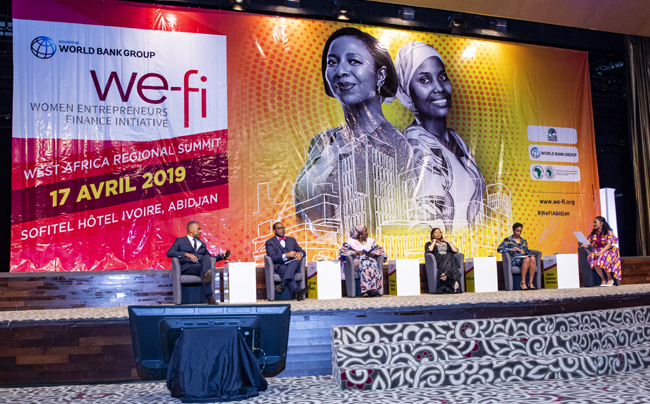 The Summit concluded with a joint Call to Action

Attended by more than 400 public and private sector leaders from West Africa and other regions, the Summit was organized by We-Fi in collaboration with the African Development Bank, the Islamic Development Bank, and the World Bank Group . It was hosted by the government of the Republic of Côte d’Ivoire.

“Women constitute the majority of Africa’s self-employed population and play a key economic role, with significant benefits for their families, communities, and countries,” Summit leaders noted in the joint statement.Acknowledging the challenge of full economic participation, they stress that “Women entrepreneurs also face other barriers that prevent them from accessing finance, markets, technology, mentoring, and capacity-building support. This limits the potential of women entrepreneurs and impedes economic growth and poverty reduction across Africa.”

Due to these constraints, female entrepreneurs in the region consistently lag men on several key indicators of business performance. A recent World Bank study  found that monthly profits and sales from female-owned firms in the region were on average 34 percent and 38 percent lower, respectively, than those of male-owned firms.

Summit leaders called on governments to undertake policy and legal reforms to increase women entrepreneurs’ access to financial services, government contracts, and the basic infrastructure of the digital economy. They also highlighted the urgent need to remove labor and mobility restrictions for women and to ensure their equal rights to property.

In the past decade, African governments have improved women’s economic inclusion by implementing 71 legal and regulatory reforms—more than any other regions in the world, according to a World Bank report. While African countries have made significant progress in closing the gender gaps, further strengthening women’s roles as entrepreneurs will transform the continent.

Acknowledging the importance of public and private sector collaboration, Summit leaders underscored the vital role that private sector and civil society organizations play in improving women’s access to capital, markets, digital skills training, mentorship, and business networks. In addition, they called for better collection and reporting of sex-disaggregated data by both the public and private sectors to help measure the impact of policy reforms on women entrepreneurs.

Through the Affirmative Finance Action for Women in Africa (AFAWA) program, AfDB is transforming financial markets by de-risking lending to women on the continent

The Summit is the first of its kind for We-Fi, a global partnership among 14 donor governments, eight multilateral development banks, and other public and private sector stakeholders, established in October 2017 and housed in the World Bank Group. Donor governments have so far committed over US $350 million to support We-Fi’s activities.

In April 2018, the World Bank Group and the Islamic Development Bank were among the recipients of We-Fi’s first round of funding to support women-owned and led SMEs, many of which are in Africa. The first allocation of $120 million is expected to mobilize over $1.6 billion in additional funds from the private sector, donors, governments, and other development partners.

“I am pleased that Côte d’Ivoire hosted the first regional Women Entrepreneurs Finance Initiative (We-Fi) Summit,”saidHis Excellency Alassane Ouattara, President of the Republic of Côte d’Ivoire. “Women play as critical a role as men in the growth of our economy. I am confident that this summit will result in concrete actions and expand opportunities for women’s entrepreneurship across West Africa.”

“I was honored to join our We-Fi partners and inspiring entrepreneurs in a meaningful dialogue with West African leaders on the economic empowerment of women. The White House, and the whole of U.S. government, stands firmly behind the goal of economically empowering 50 million women through W-GDP by 2025 and in so doing, championing American values of freedom and equality around the world. This mission is crucial to the peace and stability of Nations and is achievable if we focus our collaborative efforts on job training, entrepreneurship and breaking down the legal and cultural barriers that restrict women from achieving their full economic potential,”said Ivanka Trump, Advisor to the President, United States of America.

“In Africa, women are more likely than men to be entrepreneurs, but they face entrenched barriers that make it harder to succeed,” World Bank CEO Kristalina Georgievasaid. “By helping tackle financial, social, and legal constraints, We-Fi can help unleash the tremendous potential of women entrepreneurs as a force for job creation and economic growth.”

“Through the Affirmative Finance Action for Women in Africa (AFAWA) program, the African Development Bank is transforming financial markets by de-risking lending to women on the continent. We invite all stakeholders to join us and be part of this game-changing initiative that will result in greater women empowerment,” said African Development Bank Group President Akinwumi A. Adesina.

“Supporting women entrepreneurs requires comprehensive solutions that focus on innovation, value chains, and use of Islamic finance. We should considerwomen entrepreneurs to be partners of development financial institutions rather than recipients of financing. Our role can thus be to incubate andempower their businesses, not just to provide financing,” saidIslamic Development Bank Group President Bandar M. H. Hajjar.

“ECOWAS welcomes the We-Fi initiative and member states fully support it,” said ECOWAS Commission chairman, Jean-Claude Brou. “In addition to the various ongoing programmes and projects in favor of women entrepreneurs, ECOWAS member countries will work with the We-Fi Secretariat to implement actions and reforms needed to further promote women entrepreneurship across all sectors within the region.”