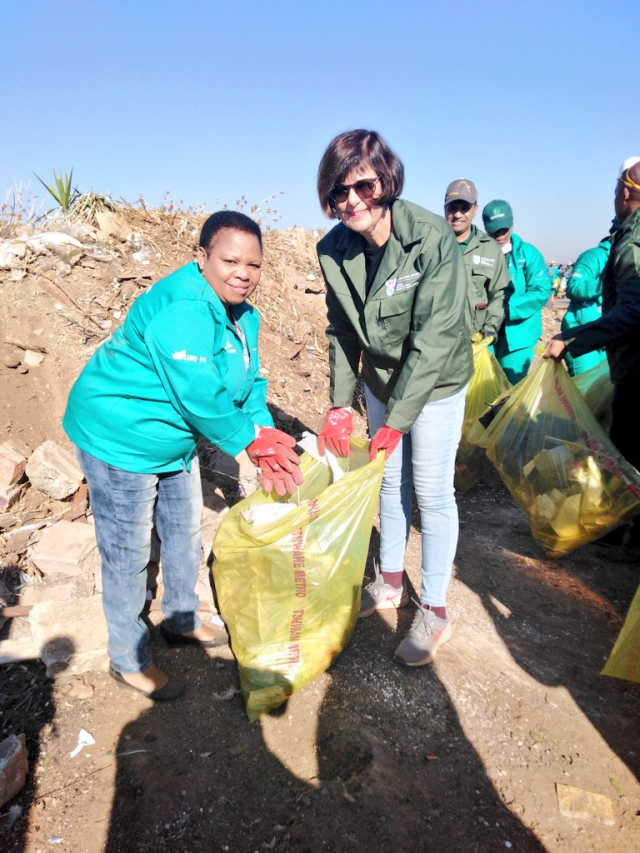 Creecy, who was sworn into the portfolio on 30 May, on Wednesday led the community of Mamelodi East, Pretoria, in a campaign to clean up and raise awareness about waste management and the significance of a hygienic and safe environment to the health of all South Africans.

The Deputy Minister of Environment, Forestry and Fisheries, Maggie Sotyu and Gauteng MEC for Economic Development, Agriculture and Environment, Dr Kgosientsho Ramokgopa, joined Creecy in the initiative, held under the auspices of the Good Green Deeds programme that was launched by the President in March 2019.

Creecy said government is working on a waste management strategy for better control of waste.

“… Once the process is complete, we will then focus on the implementation of the strategy,” she said.

The Minister expressed concern over the lack of efficient waste management at community level. She said emphasis will be placed on empowering communities to manage waste.

“One of the things I would like to see happening is environmental consciousness in our communities. If you want to change behaviour of communities, campaigns such as this will have to be on an ongoing basis,” Creecy said, adding that environmental issues are everybody’s business.

Local resident Thuso Mphoko said he was inspired by the Minister’s determination to better the environment.

“We want government to continue encouraging people to take care of their environments.”

Mphoko wants the momentum of today’s campaign sustained so that communities can get used to cleaning up their environment.

Echoing Mphoko’s sentiments was Thato Seakameng, who said clean-up campaigns must be conducted on a regular basis.

“Government must punish all those people who violate bylaws by creating illegal dump sites.”

The Good Green Deeds programme was recently launched by President Cyril Ramaphosa to mobilise all sectors of South Africa to become more environmentally conscious. The programme seeks to promote behavioural change towards littering, illegal dumping and waste in general.

Since the launch of the programme, tons of waste have been collected in different communities in efforts to improve health and wellbeing of South Africans as well as the very appearance of the country by eradicating illegal dumping, littering and unsustainable waste management practices.

The programme ties in well with initiatives such as World Environment Day, which began in 1972 and has grown to become one of the main vehicles through which the United Nations (UN) stimulates worldwide awareness of the environment and encourages political attention and action.

World Environment Day is the people’s day for doing something to take care of the Earth, and that “something” can be local, national or global. It can be a solo action or involve a crowd.