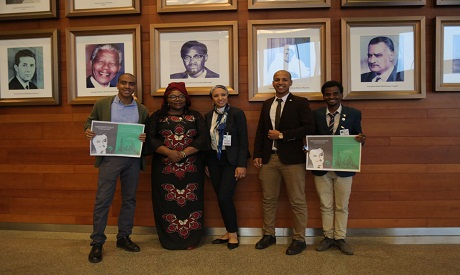 Egypt’s youth and sports ministry said in a press release that the applicants represented 51 African countries and their average age was 28; a hundred were selected to join the fellowship

The Egyptian Ministry of Youth and Sports said that around a thousand young African people had applied online for its new Nasser Fellowship for African Leadership.
The fellowship will take place in Cairo from 8 to 22 June.

The ministry said in a press release that the candidates represented 51 African countries and their average age was 28.

A hundred were selected to join the fellowship.

“The fellowship aims to popularise the authentic Egyptian experience in national institution-building and to create a new generation of young African transformational leaders with a vision that aligns with the Egyptian presidency of the African Union in serving the goals of African unity through integration, training, capacity building, the development of strategic visions, as well as organising meetings for the most influential young leaders at the continental level,” reads the release.

The press release noted that the fellowship had been widely covered in local and international media.

According to the release, Egypt’s ambassador to Ethiopia, Osama Abdel-Khalek, praised the Fellowship as one of the key mechanisms for empowering African youth.

The Chair of the AU Commission for Science, Technology and Human Resources, Professor Sarah Agbor, praised the Nasser Fellowship for African Leadership “as a platform serving the one million by 2021 initiative launched for empowering and developing youth leadership in Africa,” at a meeting with Ghazali in Addis Ababa.

The 2012 initiative aims to train one million young Africans in the fields of education, employment, entrepreneurship and participation by 2021; the Nasser fellowship supports the initiative’s education track.

Agbor also praised the objectives of the fellowship which she said converge with those of the AU’s Agenda 2063, according to the release.

Global Business Forum with an astounding line up of global innovators