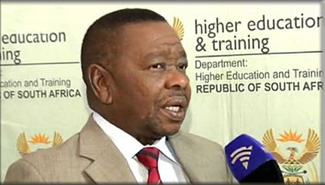 Science and Technology Minister Dr Blade Nzimande says progress has been made towards the establishment of a five-year R5 billion SMME fund aimed at helping innovators commercialise their products.

The Minister said this when he briefed the media ahead of tabling the department’s Budget Vote at the National Assembly on Tuesday afternoon.

“I am pleased to report that progress has been made towards establishing a fund that will help bring locally developed innovations into the market.

“The fund is designed to largely de-risk the early stages of technology commercialization and business development.

“An injection of R1 billion per year for five years is expected to make a significant impact in making these businesses more attractive to investors for significant scale-up,” he said.

The department’s Director-General, Dr Phil Mjwara, said the fund is being mooted in recognising that the country has a number of start-up companies that are trying to commercialise their products, but in the absence of funding, they are unable to upscale and attract investments.

Mjwara said, for example, that one of the challenges faced by SMME innovators was suppliers expressing an interest in taking up their products, but are not willing to invest in them due to concerns that the companies might not remain sustainable and might shut down “in three or four years’ time”.

He said in this regard, the department was thinking of introducing an insurance programme to sustain SMME enterprises.

Minister eyes increasing research and development to 1.5% of GDP

Dr Nzimande said the department will, over the next five years, continue to play its role in driving and advocating for increases in gross investment in research and development as a percentage of Gross Domestic Product with the aim of achieving the National Development target of 1.5%.

“This will continue to be accompanied by the implementation of our tax incentives in investment in research and development.

“With the budget for 2019/20 increased to R8.150 billion from the R7.790 billion allocated in 2018/19, we have identified initiatives to develop new research and development of industries that could help improve South Africa’s value addition in what we produce and export,” he said.

Powering up communities through hydro-fuel technologies

Dr Nzimande said, meanwhile, that progress has been made in preparing the country for a hydrogen economy.

Briefing journalists, he said that to date, the work of the Hydrogen South Africa (HySA) programme has resulted in the establishment of spin-out companies whose products are attracting market interest.

“We have also started rolling out demonstrations for the provision of electricity and mobility using platinum-based hydrogen fuel cells.

“Later this year, through the HySA programme, we will be collaborating with the Department of Energy, iLembe District Municipality, global fuel cell manufacturers, and local black-owned companies to power over 200 households in a rural community in KwaZulu-Natal using HySA-generated intellectual property,” he said.

Board approves US$98.22 million loan for East Africa Centres of Excellence...