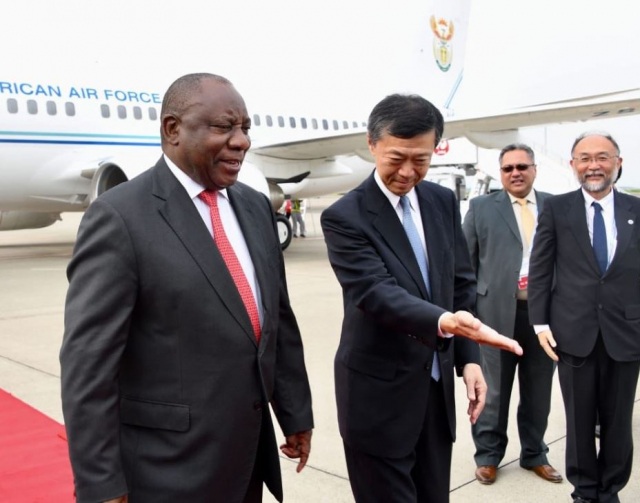 President Cyril Ramaphosa has this morning arrived in Japan where he will participate in the seventh Tokyo International Conference on African Development (TICAD VII) Summit.

TICAD VII takes place in Yokohama, Japan, from 28 to 30 August under the theme of “Advancing Africa’s Development through Technology, Innovation and People”.

TICAD is a multilateral leaders’ forum on African development that was first convened in 1993 in Japan.

The Summit is expected to expand the partnership between Japan and African states.

Accelerating economic transformation and improving business environment through innovation and private sector engagement; deepening sustainable and resilient society, and strengthening peace and stability are among the issues identified for the summit.

“The working visit will also provide a platform for President Ramaphosa and members of Cabinet to invite global partners to experience South Africa as an investment destination and trade partner, and to participate in the country’s efforts to secure faster, sustainable and inclusive economic growth and reduce unemployment,” said the Presidency.

On Wednesday, 28 August, the President will participate in a South Africa-Japan business roundtable to be hosted at the headquarters of the Nissan Corporation and in which a South African business delegation will engage with their counterparts in Japanese commerce and industry.

More than 140 Japanese companies have an investment footprint in South Africa totalling more than R90 billion.

The government of Japan as well as the country’s corporate sector view South Africa as a strategic partner on the African continent and within the context of the programmes and activities of TICAD.

The Summit will focus on science, technology and innovation; human resource development and education; the oceans economy; climate change and disaster risk reduction, and agriculture.

Also on Wednesday – the President will address a Summit forum on Science and Technology in Society and will co-chair a plenary session on economic transformation.

“South Africa views the partnership between Japan and the African continent as an enabler for infrastructure development and industrialisation throughout the continent.

“President Ramaphosa is expected to have a number of bilateral engagements with counterparts attending the Summit,” said the Presidency.

On Thursday, the President will participate in a public-private business dialogue coordinated by Trade and Investment South Africa, an agency of the Department of Trade and Industry.

The President will also have an engagement with the Japan External Trade Organisation, a government-related organisation that promotes mutually beneficial trade and investment relations between Japan and other nations.