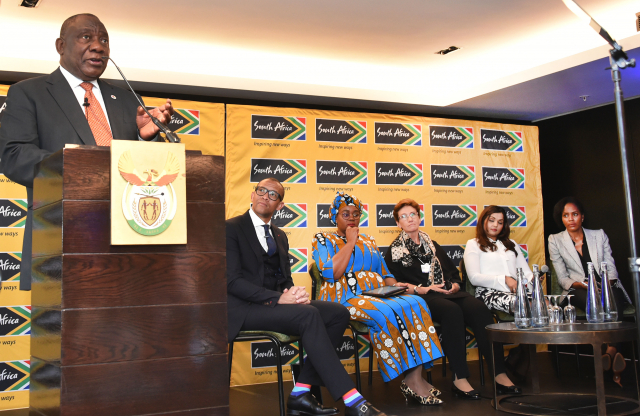 President Cyril Ramaphosa has called on investors to join in the new momentum and look south.

Addressing Brand South Africa’s interactive breakfast session held on the side-lines of the World Economic Forum Africa in Cape Town on Wednesday, the President said South Africa is a fertile ground for new investment and the country is also addressing constraints to growth.

This session took place a day after Statistics South Africa announced that the country’s economy grew by 3.1% in the second quarter of 2019 – between April and June.

“Investing in South Africa is not just about securing decent returns. It is also about staking a claim in the future of a great nation that has the means and the drive to become one of the world’s most vibrant economies.

“An economy that is fertile ground for companies and businesses who are prepared to invest in human capital to take advantage of the opportunities presented by the 4th Industrial Revolution.

“I call on all investors present here today, particularly local investors, to be part of this new momentum,” he said.

The session was held under the theme: Enhancing the ease of doing business in South Africa.

President Ramaphosa said in partnership with the private sector and NEDLAC, government is working to implement the agreements of last year’s Jobs Summit.

On Monday, government held the first monthly meeting with leaders of business, labour and communities to tackle the country’s employment crisis.

Over the next few months, the committee will address key constraints to greater investment and growth, such as the cost of doing business, security of electricity supply and policy uncertainty.

“Each meeting will focus on a particular sector of the economy where intervention is needed to prevent job losses and stimulate far greater job creation.

“This approach is informed by our determination that we can only address the challenges we confront through partnership.

“We will only be able to meet our targets if we have all sectors of society on board, including the private sector, which is the main source of job creation,” he said.

Ngubane-Kubayi said while she got insights about how some countries, like France for example, believed that South Africa was an expensive country to visit. She said government was making the country attractive to come to and cited the recent reforms in the VISA regulations.

Leoka said foreign, as well as domestic investors were selling bonds and equities.

While Leoka said to attract investment would mean SA needs to get its house in order and address domestic concerns, Lucas-Bull said there was a need to ensure that the country was able to deliver basic services by investing in human capital.

She said, for example, municipal officials that get caught with their hands in the cookie jar must be let go.

In response, the President said he was concerned about the net investment outflow of R53 billion.

He said government was hard at work to reposition South Africa as a preferred destination for investment and that he was glad that last year, South Africa was able to secure a commitment of up to $30 billion flowing in.

He was hopeful that this year’s investment conference would yield the same results.

On the issue of corruption, the President said people who have done certain things need to stand up and be accountable.