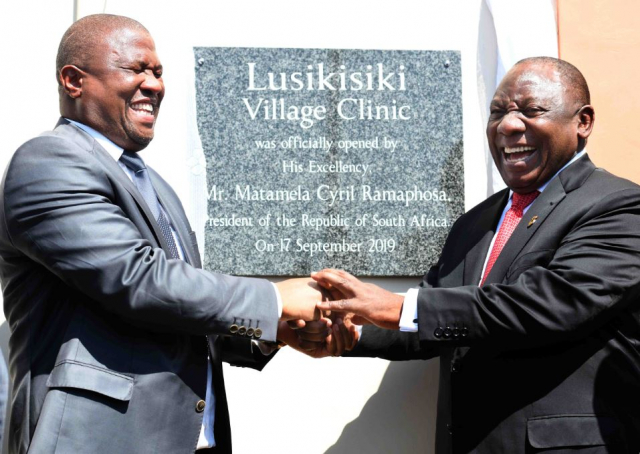 The world class clinic is fitted with units such as emergency services, dental care, optometry, a section for chronic patients, a 24-hour maternity ward, a chemist and a rehabilitation centre powered by medical professionals.

The clinic also has a waiting room and rest rooms for the staff.

“The clinic is world class and there is none like it in this district,” said the President.

President Ramaphosa, alongside Health Minister Dr Zweli Mkhize, launched the clinic located in Ingquza Hill Municipality in the Eastern Cape ahead of the Khawuleza Service Delivery and Development Model launch on Tuesday.

Khawuleza is about adopting an approach to development that is more practical, achievable, implementable and measurable. Development will be pursued through a single, integrated plan per district that outlines the role of each sphere of government, called the #OneDistrictOnePlan.

Through the new district-based coordination model, all spheres of government, working alongside social partners, will synchronise plans to deliver services and address economic development challenges.

The launch of the clinic takes forward government’s commitment to ensure access to quality health care for all South Africans.

“Primary health care in rural areas is a primary goal for the National Health Insurance project. The NHI aims to provide world class health care at hospitals and also clinics. The clinic in Lusikisiki already complies with the prescripts of the NHI,” said Mkhize.

The Health Department has also put together a committee that will ensure the new facilities are maintained and always consistent.

In line with the district model’s aim to streamline service delivery and development, the Communications and Digital Technologies Department also provided connectivity to the new clinic.

Communications Minister Stella Ndabeni-Abrahams joined the President to showcase the broadband connectivity at the clinic, including applications.

The launch of Khawuleza at the OR Tambo District Municipality in the Eastern Cape is the first pilot. The eThekwini Metro will serve as the second pilot, followed by Waterberg in Limpopo.

The OR Tambo pilot will serve as a learning curve on the roll out of the district model from a rural perceptive, while the eThekwini launch will offer the urban perspective.

Waterberg will allow government to learn about the implementation of the model through the lense of a mining town.

Best practice will then be rolled out in other metros and districts nationwide.

Mini Grids Deployment in Sub-Saharan Africa to be Boosted at Nairobi...

#DigitalForDevelopment: Alexander De Croo on a tech mssion to Kenya