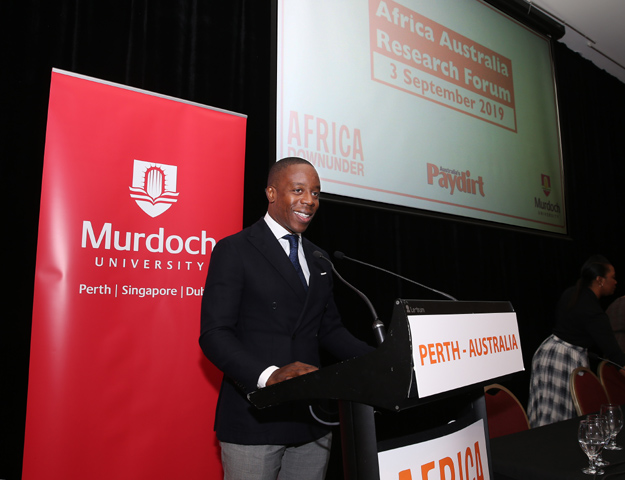 The initiative seeks to strengthen Murdoch’s links with Africa across research and innovation expertise, strategic interest and networking capabilities

Kojo Annan has used his keynote speech at the 9th Annual Africa-Australia Research Forum in Perth, Western Australia, to urge the worldwide African community to strengthen the continent’s youth.

Annan, the son of former UN Secretary General Kofi Annan, was championing Africa’s greatest resource – its young people – at Murdoch University (Murdoch.edu.au), which hosted the Forum in association with Africa Down Under to support the University’s Third Commission.

The initiative seeks to strengthen Murdoch’s links with Africa across research and innovation expertise, strategic interest and networking capabilities within Australia, in Africa and globally.

The Third Commission focuses on the six themes firmly rooted in the agenda for action identified by the Africa Progress Panel as being in need of more signification research attention, bolder policy innovation faster implementation on the ground, enhanced political leadership, and the conceptualisation and roll out of innovative research solutions.

Annan, a serial entrepreneur and investor, acknowledged the importance of the wider world in supporting his call for stronger action, in driving forwards and implementing Africa’s own agenda for transformation.

“We have ample opportunity to shift Africa’s story from one of poverty and corruption to one of abundance, equity and powerful, modern, all pervasive humanitarian style leadership,” Mr Annan said.

“However, despite this plethora of opportunity, Africa has remained resource-rich and outcome-poor.

“Gold, silver, diamonds, oil, copper, timber, etc. – all are abundant, and yet, these resources haven’t been enough to lift the continent out of poverty.

Through initiatives like Africa Down Under and the Africa-Australia Research Forum we can better understand the effective structures that harness the formidable African brain power
“Perhaps, because whilst the world at large focuses almost exclusively on profiting from Africa’s wealth of natural resources, it almost entirely overlooks deploying the world’s most critical resource of all – Africa’s Youth.

“As my father so eloquently put it “any society that does not succeed in tapping into the energy and creativity of its youth will be left behind.”

Africa has the youngest population demographic across all the continents, with an estimated 60 per cent aged under 21.

However, Africa’s youth continue to face the prospect of unemployment and poverty. The African Development Bank noted that 12 million young people entered the African labour market in 2015, but only 3.1 million jobs were created.

Annan states that 22,000 young Africans join the unemployed ranks every 24 hours, which has led to him founding an organisation called Africa10 (A10) to help unlock the potential of Africa’s youth through sport and education.

“It’s time to turn our large youthful unemployed population into our strength. We have to equip them, educate them, and unleash them,” he said.

“It is time to realise we are the village that must raise the child.”

“It is only through researching together that we can create new knowledge and address issues of global importance,” Professor Leinonen said.

“Through initiatives like Africa Down Under and the Africa-Australia Research Forum we can better understand the effective structures that harness the formidable African brain power globally.”