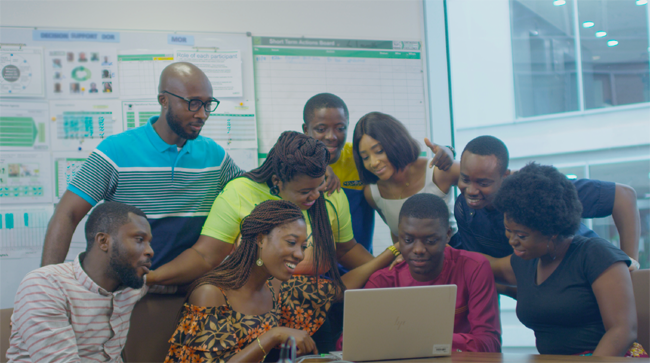 Alliance for YOUth was founded  five years ago to help prepare young people to enter the professional world.

partners have joined forces to launch the Regional Alliance for Youth in Sub-Saharan Africa to promote employability for young people.

The alliance, which will focus on creating and implementing employability programmes, mentorship and training initiatives designed to equip young people with essential workplace skills, is part of the company’s business-driven movement Alliance for YOUth, launched in Europe in 2014.

Today’s youth is the largest the world has ever seen – young people aged 15-24 account for one out of every six people globally, with 20% of the total youth population living in Africa alone.

This demographic trend is also exacerbated by the 71 million youth worldwide who are unemployed, while over 500 million are under-employed or stuck in uncertain or precarious jobs. Unemployment among youth in Sub-Saharan Africa reached nearly 30% in 2016. Without concerted action, it is expected that nearly 50% of youth in the region will be unemployed by 2025.

“We believe that investing in youth is vital for thriving, resilient communities, and helps to build our business too,” said Rémy Ejel, Market Head for Nestlé Central and West Africa. “Young people are the next generation of employees who will keep our company competitive, the farmers who will grow the crops we need, and the entrepreneurs who will help us reach new markets, regardless of their field or level of expertise. This is just the beginning,” he added.

The Regional Alliance for Youth in Sub-Saharan Africa

The alliance was launched in Côte d’Ivoire today, October 30th. It will also be launched in Angola and South Africa on October 31st and November 4th, respectively.

With the support of the Government of Côte d’Ivoire through ‘Agence Emploi Jeunes’, a government agency that promotes youth employability and employment, and the International Labour Organization, the regional members of the alliance in Côte d’Ivoire also include Bolloré, Groupe NSIA, MTN, Nielsen, Publicis and Nestlé.

We believe that investing in youth is vital for thriving, resilient communities, and helps to build our business too

“Nearly 77% of the Ivorian population is aged under 35, which means that concrete actions must be taken to provide more opportunities and help to integrate these young people into the workplace,” said Zain Reddiar, General Manager for Human Resources at MTN in Côte d’Ivoire. “At MTN, we are ready to effectively contribute to this project, which we are sure will help a large part of that population.”

Similarly in Angola, the alliance will be launched in partnership with the Government of Angola, the Swiss Embassy, ADPP, Nestlé and other private companies from different sectors operating in Angola.

“The future can only be built with the next generation, the next sustainable competitive edge, especially on diversifying economies will have to rely on the youth. Young people will be better prepared than ever before for the next challenges, supporting the digital changes of the society we are living in, which at the end of the day will benefit all the stakeholders of the sub-Saharan region. Shaping the young people within our working context, in an inclusive environment, creating new capabilities, allowing within our domain to further develop technologies like Artificial Intelligence, Data Analytics, Smart Data, as many others, shall support the youth to create the world of tomorrow that they will be in. We from our side will support the next generation on this journey, creating the basis for tomorrows challenges”, says Sérgio Filipe, Siemens Angola CEO.

The alliance will combine the efforts of partner companies on hiring, skilling up and training young people by targeting tier three and four universities and vocational schools in and outside of capital cities.

These will be achieved through CV and interview skills-building workshops, identifying career opportunities and accessibility, and offering career-counselling sessions – reaching about 1,000 youths in Angola by 2020, and 5,000 youths in Côte d’Ivoire by the same period. In addition, about 10,000 youths will be reached every year thereafter in Côte d’Ivoire.

As part of the alliance, a flagship initiative will be identified and be jointly owned and implemented by members.

Nestlé founded Alliance for YOUth five years ago to help prepare young people to enter the professional world. In 2017, it was launched in Chile, Colombia, Mexico and Peru, and in Argentina, Brazil, Paraguay and Uruguay a year later. It was also recently launched at the World Economic Forum in Davos in 2019 with 20 other international organisations.

By joining the Regional Alliance for Youth, companies – irrespective of size or turnover – can help to create a long-lasting impact for young people, while also enhancing their business, staying competitive and reaching more consumers.